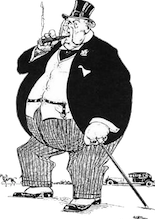 As one of the founders of the technology that made Peter Thiel and Palmer Luckey so rich, it disgusts me to see how they are using their wealth.

I've written about Thiel before. He is most famous for suing Gawker out of existence because they published an article saying he's gay (he is). There was nothing illegal or improper about that, so he funded a different lawsuit, probably more than one, and the judgement in that case forced Gawker to sell out to a media conglomerate, and sidelined its founder Nick Denton.

Luckey sold Oculus to Facebook for $2 billion. His stake was worth $700 million. Yesterday it came out that he's using some of that wealth to fund an online astroturf campaign to make it look like there are lots of assholes who hate Hillary Clinton. These fake assholes don't exist. The joke is that if you know a little about tech, very little, you can make it look like they do exist.

The thing that's so galling is that the money Luckey made was based on the work we did to create a world where people could freely share ideas and life experiences. To make the world more real. To pervert it the way Luckey has is humiliating to the very technology that made him rich.

We didn't make wealth our first goal, though I did okay, thank you. No one needs the amount of money Thiel or Luckey have, and they are living proof of it. No one should be able to sue a publication out of existence in a country that was founded on free speech. And Luckey flipped it around, creating fake people with simulated speech. As with Thiel, using wealth he has no idea what to do with. Not that anyone with that much money would.

More proof that people come in one basic size, and that if you pretend you're bigger or others tell you you're bigger, just because your bank balance has lots of digits, you're going to end up doing some awful inhuman things with it. Meanwhile we have to live in a world where they, and presumably others like them to come, throw their financial weight around in thoughtless ways.

PS: I just gave $100 at hillaryclinton.com. My small way of helping undo the damage Mr Luckey did.

PPS: Palmer Luckey says the  story about him is incorrect, and he did not write the post attributed to him.