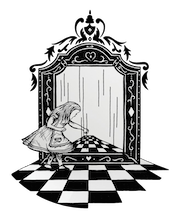 On John Naughton's blog, a link to an article that suggests it might have been a mistake for news orgs to go "digital first." Why? Most of the readers and money are still in the print versions of the news.

A disclaimer. Naughton occupies a warm spot in my heart because he was the only print journalist to acknowledge the 20-year anniversary of the blog. None of the other great news orgs thought it was newsworthy, either when it happened, or 10 or 20 years hence. That might appear random, but actually it's not.

See it's not exactly a good controlled test they've done in journalism-land, which is more of a priesthood than a hotbed of innovation. Yes, there were some journalists in the early days of the web who thought it would revolutionize their art, I even learned from them early-on in an experiment I did with the striking San Francisco newspapers. But for the most they have gone to the Internet with a feeling of necessity not wonder. You almost never hear a journalist or a journalism exec speak of all the possibilities that open up with electronic distribution, in the way a tech person ponders the exciting future opening up in front of them.

The big missed opportunity of electronic distribution of news is that there is no cost of goods. You can include as much content as there is. And therefore you can let the sources, esp ones who are good writers, and who have an ability to put their own interests aside, and write passionately about the issues and opportunities of the day, speak directly to the readers, without having reporters filter and dumb-down what they say. If you've ever had the experience of being interviewed by a reporter and then see how your thoughts are expressed, you know how valuable it would be sometimes to cut out the middleman. They go for the salacious, try to make you look like a hypocrite, on the theory (I guess) that that sells subscriptions. Why should I as a reader care if it sells subscriptions? I read in order to be informed and inspired (and yes, titillated and amused).

As with everything, the net offers the opportunity to disintermediate. But journalism has instead approached the Internet as the electronic equivalent of the paper distribution system. Nothing more than that. So why should we be surprised if it fails to achieve the potential promised by the hype?

As Upton Sinclair once said: "It is difficult to get a man to understand something, when his salary depends upon his not understanding it!"

Imho, that is exactly what's been happening in journalism.

Once blogging took hold, there was no excuse for reporters and their bosses to not see the opportunity to help the sources to go directly to the readers. We're still waiting for journalism to embrace that opportunity.

Note that other activities online haven't stagnated the way news has. Discussions (Facebook), singles (Tinder), classifieds (eBay), Amazon, airlines, pornography, gaming, entertainment, politics -- all have all embraced online distribution, and all those activities are forever changed.

And even news hasn't waited for the news industry. It happens on Twitter now. Why didn't one of the established news orgs see the opportunity to give newsmakers a platform from which to make news? Instead it happened by accident, to a tech org that still doesn't understand how revolutionary what they've created is.

Sometimes it's good to flip a statement around and see if it makes sense. "Journalism will always be printed on dead trees." How does that sound? Does that even begin to make sense?

Personally, when the web started carrying news I noticed that my print subscriptions to the NYT and WSJ were staying unread, so I cancelled them. I can't even read a printed newspaper anymore. I've tried. I used to have a ritual where I'd buy a printed paper for a plane flight, or treated myself to breakfast out with a printed newspaper. Last time I did it, I took out my iPhone and read the news there instead. It just works better electronically. I can't imagine ever going back.

PS: The study cited by Naughton in his blog post is also cited in this story by Jack Shafer on Politico.