How a podcast should advertise its RSS feed
Hopefully your podcast has an official RSS feed. If not, do that first. Now you have to figure out how to advertise it. This is how.
by Dave Winer Saturday, May 6, 2017 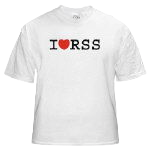 This came up in a thread on Twitter, and I realized there is no write-up or even an example of a good way to advertise an RSS feed on your podcast page.

Here's the problem. If you put a link to the RSS feed alongside the links to iTunes and Stitcher and whatever else, you're going to get a bunch of emails from users about how your site is broken. I know, because I've gotten those emails.

So you're in an organization and the boss says Do something about this! So what's the easiest thing to do, considering that you're an overworked web content person? Remove the link. You feel a little guilty because you know you're removing a resource that you yourself would want there, but this is your job, and you have to keep the boss happy.

I just want you to know that I understand. I get it.

So here's the optimal answer.

Create a simple page that says "This is a link to our RSS feed. It's used by developers and hobbyists to build their own listeners and it helps support innovation on the internet."

Right below that put a plain link to the RSS feed. Assume the user knows to right-click. Remember this is for developers and hobbyists.

Point to that page from your podcast landing page, using the RSS icon alongside all the others.

Tell your boss it's good for flow, will get more listeners, especially technical people who you can hire to help me (the overworked web content person), and yes you probably still will get some emails because some people like to write emails, but you will know that you're feeding the commons, and helping other developers innovate, and also keeping podcasting from being controlled by silos. All that from a little icon! :-)

Here's an example of such a page...

One more thing, there is a standard way to advertise an RSS feed, and it's supported by all the browsers. It works too, and if you have a choice between one or the other, use the standard way.