100,000 years from now historians will debate the purpose of this street sign, discovered on the south corner of Central Park South and Columbus Circle. 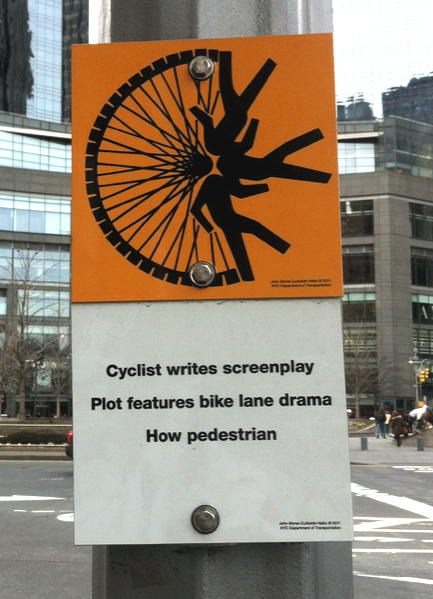 Was Earth occupied by a race of poets?

Get the tech back in tech

I was lucky to be invited to speak at a flash conference about Wikileaks in December 2010 in NY. I asked for a show of hands, how many people in the room are programmers? A lot of hands went up. So we're getting at least some techies in the audience. Why are there none on stage?

I believe this is responsible for a very dangerous situation we find ourselves in now. We're quite vulnerable to a few very large companies who control most of the flow for most people on the Internet. Most of the messages flow through their servers. It's possible to argue that this isn't the Internet at all. Because one of the best features of the Internet was its decentralized nature, its resistance to censorship. When everything flows through a few company's servers, Google, Apple, Facebook, Twitter, Microsoft, Amazon, and a few others -- it's much easier to shut things down. And it's also possible to shut things down without anyone knowing. And it's possible to shut things down with no possible recourse. This is an unacceptably dangerous situation.

1. There ought to be at least one active programmer speaking at every tech conference.

2. If there are tutorials at the tech conference, there ought to be a tutorial that shows people how to operate their own server with a few apps running on it. Blogging software perhaps. Or their own news aggregator. Or their own Facebook or Twitter clone (those might come later with an installed base of users who know how to run servers).

3. If a conference is promoting APIs, it should in addition to promoting proprietary APIs, give equal time to open APIs that are not owned by any single corporation.

Anticipating the objection that programmers are not suitable speakers because they are not good communicators, that's simply not true. It reflects people's fear more than reality. There are plenty of programmers who are great storytellers, and who are passionate about their work and able to tell you about other people's work, and what it means to people. There are far more programmers that I would like to listen to than venture capitalists or corporate CEOs. Programmers can get you excited about networks. CEOs tell you how great they are and how they're going to kill their competition. VCs tell you how much they love their CEOs. All this leaving users feeling like they're forgotten, which they truly are.

About tutorials, we achieved great results at the Bloggercon conferences teaching people how to edit their own websites, at a time when it was considered just as weird to want to do that as it is today to want to run your own server. I promise you it's no more difficult to run a server, and it's just as satisfying, and opens your mind to a lot of new possibilities. And it weakens the grip of the big companies on their users if people aren't mystified about what it takes to run a server. The mystique is the problem. The fact that you think you can't run a server is the problem.

All the money that's been made on the Internet owes a tremendous amount to the open APIs that made it all possible. It's also fair to ask the big companies to give back to replace the open-ness that they're taking out of the Internet. I like to ask VCs and company execs if they tip waiters at restaurants. Of course they all do -- but they don't have to. We do it because -- well -- why do we do it? Probably because we appreciate good service. So we should all be giving back to the Internet. And one good way to do that is to demystify and promote the technology that made it all possible. In the hope that perhaps we'll get more.

Looking at it another way, the Internet was one of the most successful development projects of all time. Why don't we continue the project instead of assuming that everything good will come from corporate developers.