I got mine yesterday. Been using it for almost 24 hours now. Here are my thoughts, based on that much use. People always tell me I should wait to write these things until I know as much as Gruber, Mossberg or Pogue, and maybe I will when I've had mine as long as they have. But first impressions are important. And they will be forgotten quickly, unless I write them down.

1. The screen is not amazing. That's too bad because I was hoping it would blow me away. Kind of like the screen on the iPhone 4. I know the iPad 3 has the same density screen, and it does look sharper than the old iPad. But not so much so that you go "that's a whole new experience." However I do imagine that it would be hard to go back.

2. I just took it out for a spin in Central Park. As you can see the pictures are really nice. This is where the density of pixels is very much visible. 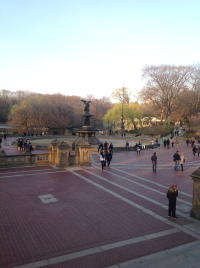 3. I got the Verizon LTE plan. And here my friends, is the reason to get one of these mofos:

That's FIOS-level performance on a wireless connection. I did that test in Columbus Circle, presumably one of the best hotspots around. But man, that's impressive. Much more so than the screen.

4. It's heavier for reading in bed. Your arm gets tired faster. And it does heat up as others have reported. Not so as to be uncomfortable, but it is noticeable.