Three people have asked me to "weigh in" on a new protocol called tent.io. I looked over the site, and I don't understand what I'm supposed to weigh in on. Anyone can write a spec. What matters is what software is supporting the protocol, what content is available through it and how compelling is the content.

RSS won not because of its great design, but because there was a significant amount of valuable content flowing through it. Formats and protocols by themselves are meaningless. That's what I say about specs. Show me content I can get at through the protocol, and I'll say something.

Sometimes a protocol can be so bad that it kills any chance of it catching on, but that's usually because the proponents are too scared to let people at the content behind the protocol. That's probably what happened with SOAP.

Think of a protocol like a road. You could have a wonderful road. Well paved. Wide lanes. Great rest areas. But if it goes from nowhere to nowhere, it's not going to be very popular, no matter how nice it is.

If you're in Madison tomorrow with a little time to kill, come hang out on the patio at the Memorial Union at 3PM. I'll be there with Andrew Shell, drinking beer and telling wild stories. Hope you can make it!

Here's a picture I took this evening of sunset on the lake from the patio. 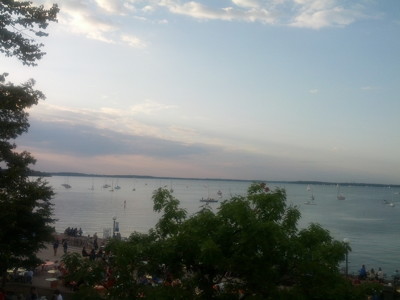