Got to the turnaround point and Cyclemeter wasn't recording. So I got a full ride in, but only recorded half of it.

I'm just going to double the numbers for the record.

There was neither a tail or head wind today, though it was windy -- the wind was blowing across the path.

Not very nice weather, also not many others out on the road. 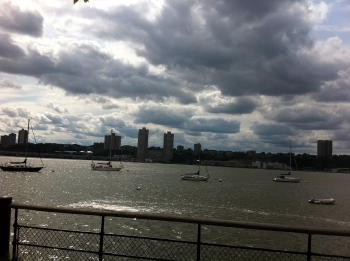 Nirvana for the public writer, day 2

Continuing the thread about Nirvana for the Public Writer.

The new idea, which is actually working in practice (so far, knock wood) is restated as follows.

What's always been elusive is the overall organization of a person's online writing.

So I get good at putting things in their proper boxes.

It's good until I have to write something for which there is no box.

Or the box I've put it in has the wrong properties (it's private, but really needs to be public).

I'm not talking about ephemera, like tweets -- stuff you blow into the wind. The writing I'm talking about is stuff that has to be re-findable.

So we accept poor organization and instead rely on search engines to pull everything together. And so far it's worked just okay.

Because we don't own the search engine, and they can and do change policies. For example, I used to be able to find everything about a verb in my programming language by entering its exact name in Google. They changed the algorithm recently and now assume that I've mis-spelled it, and give me something like it in Java or Python. Now I can't find it, and in programming sometimes you have to find it before you can go on.

But then I made it really easy to jump from place to place, and to create new places, that in every way will feel to the reader as if they are websites, but to me are just lines in an outline with text hidden, and beneath other lines in the outline.

Every bit of text is on rails, and can be dragged to another place, or referenced from another place with a relatively simple gesture or command.

The quick and easy movement is what makes incorrect categorization not such a big problem. Esp if what was correct yesterday is not correct today.

So when I write a change note for one project but then have a change for another that doesn't have a change notes site, I'm not stuck there with a few minutes of overhead to create a place to put it. And then have to remember to use that place, and what I called it -- yuck!

This becomes a bigger problem as I create connections between projects. How to avoid writing the docs in two places. How to represent the correlation not just for the reader, but also for myself -- when I have to maintain it. That's been an elusive goal for many years.

You can see how badly this works by looking in your Bookmarks menu in your browser.

And that's not even trying to factor in Facebook, Quora, Friendfeed, Twitter -- all of whom have their own shifting policies and algorithms for finding things, and what they'll let you find.

It's a good day when some of the fog of web work lifts. This is what's happening in my world right now.

Doesn't happen every year, not even every decade.