Rode up to the boat basin at 79th St and back. Light wind, gorgeous sunny day. Just warm enough, but a little on the cool side in the shade.

Thought about Apple's WWDC announcements and the way Apple went after Instapaper. Marco, who's a local guy, Nth generation Mac developer. He's re-living a story many of us have already lived. The answer is, if he depends on developers to support him, they will go with Apple. I thought I had friends too, when Apple came after my market, which wasn't really much of a market. But they all went with Apple, even if our stuff was better and did a lot more and was easier for developers and gave more to users.

I think the answer is to find meaning in your work independent of what happens with the fickleness of the platform vendor and its developers. I went on to take the same software that Apple crushed and turned it into blogging, RSS, podcasting, web APIs, all kinds of cool stuff. And yes it did eventually make me a bunch of money. But not the way everyone thought it would. Apple can't really crush you if you keep your wits about you.

Anyway -- here are some pics from today's ride. 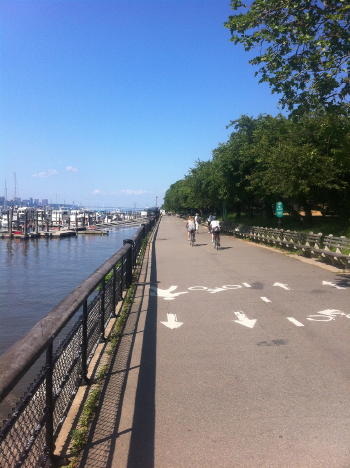 PS: I wish either Instapaper or Readability or both would make a URL shortener that I could use to push links to readable versions of stories. Sometimes I want to push a link to a story and don't just cause it's impossible to read the text because of the colors they've used. It's a really simple thing, and a way to get more people building on your software.

The French really get this one right

In the United States, the media are making a huge mistake re Twitter and Facebook by treating them as if they were open systems like the web or email. In fact, and they know this, they are corporations with eponymous services (that means the companies and the services have the same name).

In France, in the spirit of being open to competition, the government has prohibited the media from using the names of the services unless the story is specifically about the company. I think this is very smart, compared to what we're doing and not doing here.

In the United States, not only do the media treat Twitter and Facebook as if they were public utilities, like the open web, it's actually even worse. The Library of Congress, which is part of the government, is subsidizing Twitter, by doing a complete archive of Twitter, before making a serious attempt at archiving the web. This helps cement Twitter as the medium of record, which is ridiculous. The market is just getting started. How can you justifiy the government taking sides over other equivalent (or better) ways to communicate, that are not owned by a company (like the web, for example). If this isn't against the law, to use taxpayer funds to help a company achieve dominance over competitors, it should be against the law.

Further, it's just plain dumb for the media to give special position to Twitter and Facebook. If it isn't inevitable that these companies compete with other media, the potential certainly is there. And since when do CBS reporters rely exclusively on NBC facilities to get their stories out. Or Fox, or CNN. Yet they all treat Twitter as if it were an non-profit platform like the web.

Of course it would be better if the French media self-regulated so the government doesn't have to step in.