You can tell the seasons are changing and soon it won't be bike riding season, and that makes me sad.

I love to ride. It's such a wonderful feeling, it's like skiing and at times it's like flying, esp when the wind is behind you and switching direction.

And when your body is in bike riding shape after a spring and summer spent on wheels.

It's also a form of meditation, the mind goes quiet, you become a simple machine. Legs spin with strength. Eyes sharp. Taking in everything. Senses turned on max. Breathing deep and regularly. Round and round mile after mile.

From the sublime to the geekish...

I've been wanting to mount my iPhone on my handlebar for quite some time. I don't know why, I just wanted to do it. And today I did. 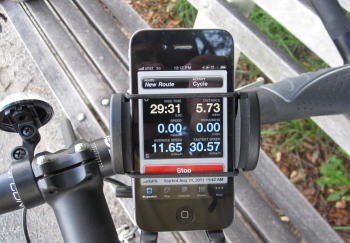 I don't know what to use it for, however.

Details: The app is Cyclemeter, which I've been using for about a year, with good results. It produces a map of my route every day. And it shoots the data up to dailymile.com. The mount is made by Arkon.

And the screen keeps dimming, and I don't want to take my hands off the handlebar to keep it going.

The speaker isn't loud enough to hear when I'm moving, and I don't wear headphones when riding, for safety reasons.

Here's a quote: "'This is an interesting experience, for those of you who haven't run for president,' he said. 'You stand up on the stage in the debate like we did the other night and look around and say, Whoa, where'd these folks come from? What an interesting assortment of characters!'"

What would a blogger do if he or she found him or herself on stage with the ragtag group of bozos and blowhards at the last Republican debate? Well, he'd explain exactly how what they were saying was complete self-serving nonsense. He'd react as if he were a person, not a candidate. And not a pundit which is a person who occupies the same crazy intellectual space as the candidates, whose job is to evaluate everything within the context of that space as if it were actually the way the world works.

However, most of the rest of us aren't in that space. If someone asks me a gotcha question I say that's a gotcha question, thanks but I prefer not to answer it. In that sense Newt Gingrich was playing the role of blogger in the previous debate. While saying the same crazy shit as the rest of them.

Look, I seriously doubt if Michelle Bachman really thinks she can deliver $2 a gallon gas. But she does say she can do it. So someone should say straight out that she's lost her mind. All evidence points in that direction.

Not that Huntsman is such a great guy. He says he likes a flat tax. Of course it would push millions of people into poverty and would give more money to the rich and super-rich, which puts off their wakeup call that life for them would be miserable if we don't do something to alleviate the misery of the former middle class. Huntsman isn't that stupid, no one could be.

Then of course you could, like Peter Thiel, build a private island on an oil rig off the shore of Calif near San Francisco. As if that means anything. Hey do you think Thiel would actually live there himself? Where would he go out to dinner? How much longer would it take to get to SFO? Who would pick up the garbage? And here's the real closer. If you so much want to cut yourself off from the lunacy of the world, why put it anywhere near a big city? Why not put it as far away from cities as possible? There are certainly much more pleasant oceans than the Pacific off the coast of Northern Calif.

See how the super-rich waste money on stupid shit? Yeah, it's theirs to waste. True.

Problem is that money is only useful up to a certain point. It can buy food, pay rent on a place to sleep, eat etc. After that, all money really does is buy you distance. I once lived at the end of a 1/4 mi driveway. After a couple of years of that I yearned for one thing -- to be in the middle of everything. I didn't like isolation. I don't think we're built that way, even the super-rich.

That's what Warren Buffet, who lives in a middle-class house in Omaha, should write about in the NY Times. The secret of money is the diminishing returns. Thiel can own all the islands he wants, but he's got to pick a place to sleep every night, just like the rest of us. And if he's near normal, he's going to want to sleep in San Francisco, not an oil rig in the middle of nowhere.

Once you figure that one out, someone's got to pay for all the stuff we all need, that no one of us can buy for himself.

That's the class warfare that's actually happening here, now, in the US. A bunch of really immature people who read an Ayn Rand novel and thought that had anything to do with the world they were born into. Once things get bad enough, I think they're going to figure it out. At least I hope so.

Mark Cuban in a blog post asked what he can do. What he can do is explain how becoming a super-rich guy changed his life, and how it didn't. And get with the other super-rich people and tell them their shit stinks too, and they need to pony up and pay more than they are now. Even if their hearts aren't in it.

Also the President took some heat from Krugman and Iglesias for talking with the CEO of Ford and Warren Buffett for advice about the economy. True, they aren't economists. But the political fight is between the super-rich and everyone else. Obama should go over the head of the Republican leadership and talk to the people they take their orders from. Yes, of course he should talk to economists too.

What NYers don't grok about earthquakes

Yesterday's 5.8 quake, centered in Virginia, was in every way a real earthquake. If you live in the east, you need to know that. Check your houses, chimneys, anything that could break that you put your bodies into. And be prepared for aftershocks.

Earthquakes are not fun. If you felt like that was fun yesterday, you don't know.

The Loma Prieta quake, which killed 63 people, destroyed a freeway in Oakland, and a neighborhood in San Francisco, and caused the Bay Bridge to be rebuilt, among other things, was a 6.9 -- much stronger than the quake that hit the east coast yesterday. But 5.8 is nothing to sneeze at. Because the earth's crust here is a lot older and more solid, the waves were transmitted further than they would have in the west. But they also did less damage -- why -- I'm not sure.

The terrible thing about earthquakes is that, unlike hurricanes, you don't know when they're coming. And the first shock from a quake is usually not the last, and not always the worst. The ground kept shaking for days after Loma Prieta. Each time nerves got more rattled. The more aware you were of where you are, just in case this is where you are when the Big One strikes.

On the radio and on the Internet, people say that the city is over-reacting with inspections and evacuations. They are not. Most of the buildings here, unlike the West Coast, were not designed with earthquakes in mind. Until yesterday we had no idea how they would perform in an earthquake. Until we look to see what kind of damage there was, we won't have any idea.

Bottom-line: that was a real earthquake, in every way.