I think Steve played a little sleight of hand with us the other day when they announced the Back to the Mac business.

It just came to me when I took an Angry Birds break with my iPad. Why can't this run on the Mac? Answer: it can. (Or it soon can, maybe next month or the month after.)

Everyone was wondering what kind of software would be sold for the Macintosh version of the Apple Store. Marco even said there would be a new class of little software, you know -- like the stuff we buy for the iPad and iPhone.

Close, but not quite.

The software we will buy from the Mac version of the Apple Store will be the actual software that runs on the iPad and iPhone. 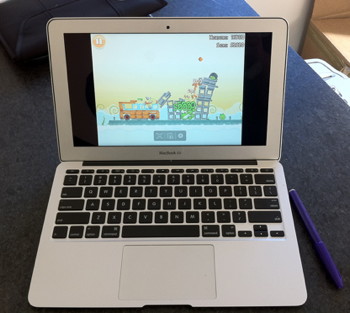 Why didn't I see this? One of my first wishes when I got my iPad was that this software would run on a Mac. I forgot that, and Uncle Steve said it the other way. The store is coming to the Mac. The store is coming to the Mac. That's the sleight of hand. What he really meant to say is that IOS software is coming to the Mac. Or maybe it's the IOS hardware I'm writing this on is running Mac software, kind of the way Carbon ran old lifeless legacy Mac apps. Which one is the "real" OS and which one is running in a compatibility box? I have a funny feeling that right now, as I type this on an AirBook, I'm using the compatibility box. Right? (I imagine some of my IOS developer friends reading this, wishing they could tell me, but for an NDA.)

Put it another way, who has the patience to play Mac games now that we've been playing iPad games?

All the other iPad apps.

PS: Everyone who said I was full of shit when I said the trackpad was the harbinger of IOS apps on Mac hardware -- I owe you all an I Told You So.

Can you feel the morph?

1. David at 37 Signals says Apple must use their new power more carefully. Been saying saying the same thing here. Not just in this loop but in previous ones. I urged Microsoft not to try to snuff out Netscape, to leave the web alone. My argument was that they'd get 60 percent of the growth no matter what, just selling more operating systems, word processors, etc. They needed the ideation process to run outside The Borg, because nothing creative comes out of the hive-mind. They can't hire the kind of people who build the stuff that makes a new layer of tech. Just kick back, I urged Bill, to no avail, and count your chips. Your pile is about to get much taller, and you don't have to do a thing. He completely went the other way, and hit two brick walls: 1. The reality of the hive. 2. The US government. My guess is that Steve Jobs didn't learn from Gates's mistakes, and now that it's his turn, he's going to fuck it up, probably in a much bigger Jobsian way. Because that's how he is.

2. Mike Arrington at TechCrunch is returning to his roots, and that's a great thing! Reflecting on his experience with TechCrunch, and obviously thinking about what's next for himself, he's asking the good questions. Who am I, what am I capable of, which direction should I head in next. I encourage him to take his time here, because he'll be living with the decisions he makes now for a long time. He's at a personal inflection point. And Mike is a powerful and super-smart guy. Expect something interesting from his corner of the world. Sent him an email of congratulations. Good work.

3. One more thing, today is Mitch Kapor's 60th birthday. In a tweet he says it's not 16. No doubt. I'm only 55, so how would I know, but I knew Mitch when he was not much more than 16. He's still the same guy he was then, only smarter and wiser. One of my best teachers when I was starting out, it was from Mitch that I learned the review process of software. That you have to take time out and put down the compiler and actually use the stuff you're creating, to solve the problem it was intended to solve. Without this reality check, done often and with thought and care, your chance of shipping something that works as a product are pretty slim. You'll miss the target every time. Seems so simple, but so often this is the step people miss.

PS: I used the word tweet in this piece. Sorry Twitter, I'm not going to capitalize the T. Nice try.