Tomorrow: Rent a bike in Amsterdam

What do you call people from Amsterdam?

Where is the best place to rent a bike in central Amsterdam?

I see Mac bike rentals everywhere. But they look like pretty plain bikes. I have a Giant back home. Probably don't need so many gears here. I've also seen Yellow Bikes around town.

Memorable city-wide parties I've been to include the Mifflin St Block Party in Madison and Mardi Gras in New Orleans. And now I've been to Queensday in Amsterdam. What a trip it was. Oy! Who knew the Dutch were so wild. Normally they're very well behaved polite people. Even a bit on the stuffy side. But on Queensday it all comes unraveled.

In every main square, or pleine as they call them, there's some kind of very loud music. Lots of techno, where songs just play for hours and there's no band, just one person with a computer and headphones. It all seems very weird to me. But if you go to a differen neighborhood, you get a different scene. In one place there was schmaltzy 40s style music, very sentimental, like a polka, but they were singing in French a lot.

Then stand on a bridge over a canal and watch an endless parade go by of boats, many with huge boomboxes, again with the techno music, except there was one playing Walking On Sunshine -- but a crazy mix of music all around it.

It's like Amsterdam goes tripping for a day. Or turns into Toontown.

We drank a lot of beer and I kept looking for the Queen. She must be partying somewhere else on Queensday. But then I tihnk we found her. (Of all places on a young woman's t-shirt. I asked if I could take her picture but the iPhone took a video. No matter it still came out well, if not a bit scattered. And there was the Queen. Mission accomplished.)

Next day the streets are all cleaned up and it's quiet again.

Best picture taken here, four women were walking by and me and my buddies were sitting down drinking beer in a streetside cafe. Had to take a picture. They posed. Click on the thumbnail below for teh full effect. 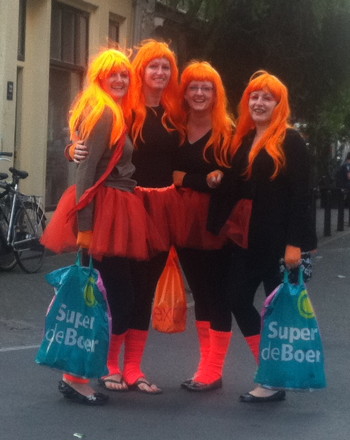 "Thanks for brightening our day!"

I've uploaded a bunch more to a Flickr set.

So far my Internet connectivity has been shitty and sparse. The iPhone is working well on the AT&T roaming plan, but I haven't been watching the megabytes, and am sure I'll end up with a huge surcharge.

Not using the Nexus S very much. Maps don't work nearly as well as on the iPhone, (I think it's probably a configuration issue or some hidden UI tricks), and the camera isn't as good, even though I have an excellent plan from Maxroam.

The maps on the iPhone make a world of difference. I'm much more confident navigating around Amsterdam. I am finding my way to places, and often going directly there, instead of wandering in wide arcs.

We could sure do much better with mobile software for helping people around strange cities with a moving party. We were connected up with about 15 other people from the NextWeb conference while we were browsing the Queensday party, but eventually we got so separated we couldn't find them. Something like Latitude with a customizable social network would have been great.

Which leads me to wonder why no social network exists that amateurs can write apps for. Where's the BASIC for social networking? (I imagine most of you are too young to remember how early Apple II's and PCs all came with BASIC in ROM.)

You know how they have popup stores around major holidays. I need a popup social network for events like Nextweb at Queensday. And I don't think it's an app, I think it's a script and an outline.