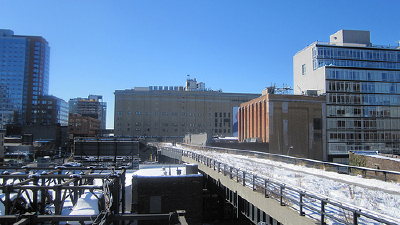 I walked the length of the (unfinished) Highline today. It was great. Just wish it went all the way to 34th St. Much easier walk than on sidewalks. You don't have to stop for anything.

Google says there's been over 9 million Buzz posts and comments so far. Impressive. But there hasn't been a single link in my tweet-stream from Buzz, except for the one I posted, when I first tried it out (and quickly shut off when I saw the mess it created in my Gmail inbox). What does this mean? Well, it hasn't gone viral, at least to the people who I follow on Twitter.

Fred Wilson, an investor in a bunch of companies in the BuzzSpace, has his review.

Wondering if anyone is thinking of creating a wonderful webmail product that's just webmail, no tricks. With Google-quality spam filters. I'd pay $100 per year for the service. But no tricks! I don't want any new products to launch through your product. I don't want to reach into my email box one day and find a snake!

In other news, Mike Arrington says TED is a sleeper.

Last night Twitter sent out an update on oAuth. They saved the best for last. In June they plan to turn off Basic Authentication in favor of oAuth. They say developers should hurry up and switch now so they don't have to panic come June-time. But they don't say which oAuth developers should adopt. Problem is there are three, and Twitter says, in the very same email, that they like all three. I hear that a lot of people at Twitter read my posts, so please read this: I suppose it's okay to turn off Basic Authentication, if you really must. You're going to lose some apps when you do. I won't convert very many of mine, but at least I can since I've implemented oAuth 1.0. But I'm not in any hurry to implement the others for a couple of reasons: 1. They're moving targets. 2. I'm not investing much time in Twitter development these days, I'm busy with other things. So come June, a bunch of my remaining apps will die. I think it would be better to hold on to the developer momentum and go really slow on the deprecation.

Google says the reason they don't support the Twitter API is that it's not an open standard. Two comments. 1. WordPress and Tumblr thought it was good enough for them. 2. Isn't Google the company that scanned all those books and published them on the web without the authors' permission?

My Roadrunner package will arrive today according to Fedex. According to the instructions, I should have service after I install the modem and call the office. Made total sense until I got a call from Time-Warner yesterday saying they had to send an installer out to turn it on. That won't happen until late next week. But the previous tenant in my apartment had Time-Warner Internet. Seems to me they can turn it on without having to get into the apartment. I'm sure all the wires here are still connected. I love big companies. (Not.)

Had dinner last night at a wonderful West Village restaurant called Po, recommended by the illustrious Matt Terenzio. One of the great things about the neighborhood I live in -- lots of great restaurants. I need to get some exercise today!

It's a sunny day so I think I may go explore the Hudson and the Highline.

Having lunch with Dan Farber who is now the Editor In Chief of CBS.Com. I knew Dan when he was knee-high to a grasshopper, and just Editor In Chief of MacWorld. Also ran into Eric Hippeau who is now CEO of Huffington Post. These are the guys I grew up with in tech. Now they're in NY running things. Proves the old motto, be kind to those you meet on the way up.

Once again Jeff Pulver honors me by making me the opening speaker of his #140Conf here in NYC, April 20. I must have been very kind to him at one point! On after me are the esteemed John Borthwick of Betaworks and the honorable Jay Rosen of NYU.

I wonder if Jeff knows the counter-culture significance of 4/20?