Note: This problem has been solved. Something about a tarball and the current node.js installation or distribution or. Something shifted in the plate tectonics and it broke my water pump. This is all voodoo, I tell you!

I have a cold. I'm trying to do some development work anyway. I have a project I'm itching to see run, and I'm bored. Because of the cold, my mind is a little foggy, and it's likely the problem I'm having with Heroku is something I'm doing wrong that's completely obvious. Hence this blog post. 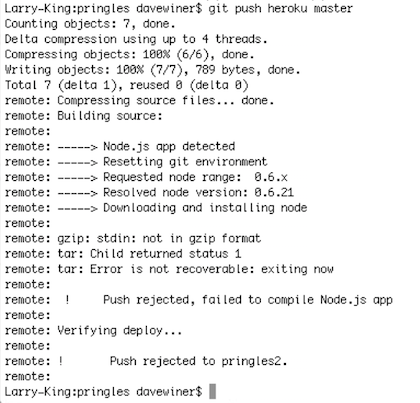 At first I thought the problem might be that I'm using a new Mac and it's not initialized in some way. But I kept my original Mac around, completely unmodified, the one I did months of Heroku-based development work on, and repeated the steps with the same results. So it seems the problem isn't on my machine.

I also thought it might have to do with some package I was using, that's why I reduced it down to using no packages, and just being a simple console.log call.

What you can do

If you see the problem, please let me know.

If you're a Heroku user, can you think of something for me to check?

If you're a Heroku user, and feel like wasting some time, can you repeat the steps? Do you get a different result?

I'm basically stuck until I get this working, so I'm highly motivated.