SCRIPTING NEWS
It's even worse than it appears.
Sunday, February 2, 2020

The only football team I've ever been a fan of, the San Francisco 49ers, is in tonight's SuperBowl. I'm angry and frustrated that the NFL won't hire former Niners quarterback Colin Kaepernick. I also remember the intellect, wisdom, character, professionalism, talent and luck of the Niners of the 80s and 90s. So just for tonight, I'll be a football fan again. Go Niners! 🏈#
New Little Outliner out yesterday. Report problems here. #
BTW, to tech-savvy users who are regulars here. Please pitch in and help test the new release of LO2. As you can see from the thread on GitHub, the problems tend to be technical, though the typical user of the outliner is not. If you've looked for a way to pitch in, this is where I need the most help. Keep an outline on LO2. When there's a new release try editing it. Do the changes stick when you reload the page? Try creating a new outline. Open an existing one. Log off and log on. Go through the menus and try all the commands. We're looking for breakage, something that used to work but because of changes doesn't work now. A lot of stuff changed in this release. But most of it isn't visible to users. Help me out. This is foundational work. I need LO2 to work for people, smoothly. Thanks.#
We have a lot more data on the problem. #

Trump is picking a fight with Michael Bloomberg, re his height. Gina Smith points out that Bloomberg is an inch taller than Putin. Heh. And then I read that Bloomberg's spokesperson, Julie Wood (a woman, this is important) said this: "The president is lying. He is a pathological liar who lies about everything: his fake hair, his obesity, and his spray-on tan." You know, this is the first time in four years Trump has been in presidential politics, talking about people's bodies and demeanor, that someone has come back at him with this line of attack, which is totally valid. When you're being bullied by someone so obviously vulnerable, give it back to him. It's even worse better when a woman says a man is a liar, bald, fat, and wears makeup. Trust me on that. 💥#
Bloomberg's campaign manager has a killer idea in this podcast starting at around 8:30. Here's the spoiler. The first Democratic primaries should be in Pennsylvania, Florida, Wisconsin and Michigan. What an advantage that would be in November#
Lamar Alexander's story doesn't add up. If it's up to the voters, can we have the information we need to make a decision. Bolton's testimony is vital. As is the documentary evidence. I've served on a jury all the way to verdict, so I know how this works.#
I asked Alexa what time the Superbowl starts. 6:30PM kickoff.#
To Amazon. I'd like to be able to say "Alexa record a podcast." When I'm done I say "Alexa stop." She mails a link to the MP3 to me. Bing.# 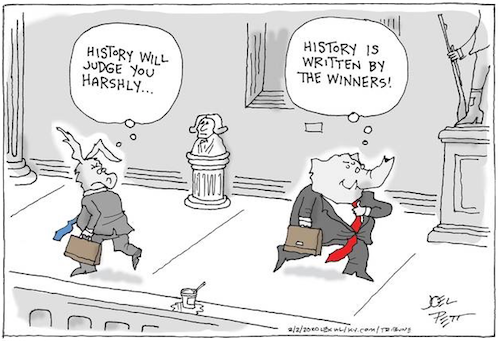 For everyone who thinks Trump is stained forever by impeachment.#
Bojack finale, initial thoughts#