See this announcement on the Frontier News blog.

I bought a Canon scanner to use with my MacBook Pro 13-inch laptop, but it just doesn't work. Once in a while it produces a scan, but most of the time, the drivers say they can't find a scanner attached to the computer.

I've been advised this may be because the device is powered through USB, and there isn't reliable power coming through USB so the scanner doesn't power up.

It first I thought I was out of luck cause I don't have a desktop at the NY apartment, but then I realized I do have a Mac Mini. So I tried installing the drivers on that computer, but was told they require Snow Leopard. Okay but the Snow Leopard disk is back in Calif. So I spent $25 to get another copy of the OS, and tried to install it on the Mac Mini, but...

After waiting an hour I recycled the power, but the computer still doesn't show up on the LAN.

That's where I am now. Anyone with experience installing Snow Leopard on a headless Mac Mini? Help! If this works I'll put in an order for an iPad today.

Me and iPad: Not now 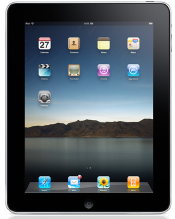 I was up this morning at 8:30AM Eastern and saw the notes that the iPad was now available for pre-order. So I went through the process, updated my credit card on Apple's website, changed the address and phone number. The total price was a bit of a shocker -- approx $650 including tax.

I hesitated. I was typing the order on a $350 Asus Eee PC that I had bought a long time ago. It gets about 8 hours on the battery. It has a 160GB hard drive, three USB ports, Ethernet, webcam builtin. Real keyboard. No DRM.

I went to Amazon to see what I could get for $650. Lots of stuff I'm not buying that I'd like to have. A nice Polk Audio soundbar is about $500.

I could fly roundtrip to San Francisco for that amount.

I thought about which I would bring with me on a trip to San Francisco, an iPad or the Asus. No doubt, I'd bring the Asus. I have no idea what I can do with the iPad, and most important, I have a pretty good idea that I won't be able to run my software on it, or watch a movie I ripped from a DVD. Or listen to a podcast I downloaded with non-Apple software.

I decided that no matter how important it is for my work to understand what Apple's product does, it can wait until I find out what the product is. I guess I no longer have the Apple bug up my ass that says I have to get one of everything they make on the day it comes out.

So for now at least, the answer to the iPad is "no."