On Wednesday last week I wrote about a scanner I heard about, wondering if a scanner could really be that good. Later that day I ordered one from Amazon.

UPS lost track of it, saying it was on the truck for delivery for five days. This morning a battered package arrived, after Amazon arranged to ship a replacement. So now I'm going to have to deal with returning it after it arrives. Not a big deal. I wish Amazon could just cancel the shipment, but apparently that's not possible.

Anyway, finally I'm getting a chance to test this impulse purchase.

Here's a picture of the device. 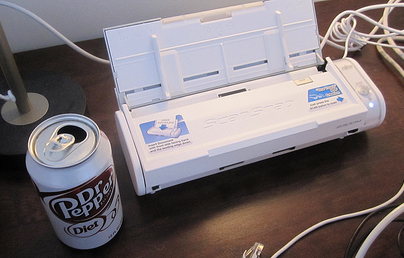 It's hard to explain how small it is. It's very very small. You can easily hold it in one hand. I put it next to a can of Dr. Pepper so you could see just how small it is.

A movie that demos how the scanner works:

Here's the PDF that was generated by the scan in the demo above.

One thing that might not be clear in the demo is that it scanned both sides of the letter.