I'm starting to get annoyed with Google's search engine. So much extra stuff, now they're displaying people's web pages in the margins of the search results. Why are we even going there. Is there a way to turn it off.

The reason we liked Google was it whisked us on our way to where we needed to go. Now, they're doing what the old search engines used to do, clutching us ever-closer. They're even sucking off-site content into their site. Google is becoming as much of a silo as Facebook is. Only it's happening slowly.

Google used to be fast, not just in responding to search queries, but in staying out of the way and letting us get on with it.

We need a Google for Google. Something to search it without getting in the way. So we can find what we're looking for on Google, and god forbid it might be on another site, there too.

"People come back to places that send them away."

A simple thought. A plain jane search, with none of the bells and whistles. Really excellent results, of course. I think such a search might go over well. Maybe no graphics at all. Just text.

Something I wouldn't mind linking to from a blog post. Starting to resent all the holding-on Google is doing. Remember the point of a search engine is to send you away. It's how Google won our hearts in the first place. Wonder if they have any corporate memory of this.

I get the feeling that users are more and more pawns in an epic battle to the death among the titans of tech. I'm looking for an opt-out.

Pretty sure this was the last ride of Sept 2011.

It was a good one. I was sure I had a tail wind going uptown, but then I felt like I had one coming back down.

The roads were filled with all kinds of people, walking, running, eating (there's a food festival in Chelsea). Lots of traffic on the streets. Couldn't figure it out then I remembered it's the holidays. My lifestyle didn't notice.

Got a pic of Point Thank You. I first noticed this sign a few rides ago. This time I had enough time to get the picture. 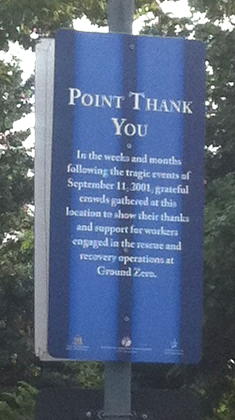 Not living in NYC in the aftermath of 9/11, this was the first I had heard of this place.

We used to talk about mind bombs here without too much shame.

Now we're for some reason afraid to say something is explosive even when we know it is??

Time to stop doing that.

Chris Davies asked about my paragraph-level permalinks in a comment on Google Plus. I told him about Blorkmarks, which is what comes next, imho.

Basically they're DNS-based markers in outlines. Here's a demo.

You kind of have to stare at it, and think and poke around to see all the interconnections. This is pretty fully-baked stuff.

Hidden away is the Accept header that allows you to request the OPML instead of the HTML. And then you're off to the races. (Because you get all the structure and data along with the text.)

If Google had a similar feature, I wouldn't have to link to Chris's post, I could include it.

That's what we all should be aiming for. Structures that seamlessly bridge systems, so we have real interop. Then we get to the next level, and have some fun before the next opportunities start coming into focus. The blogging silos that Google, Facebook and others are developing are not the answer.

Like, we didn't know that political blogging would be big when there were just a handful of blogs. That kind of observation.

Intuitively I think this tool gives new purpose to academics, researchers, librarians, programmers. After that, I don't know. Lawyers maybe.

BTW, Amazon's Route 53 was the missing piece for a long time. I needed a way to program DNS, and they finally delivered more or less exactly what i was looking for, at least to get started.

How come there's no command line in the browser.

A window pops up and lets me enter a little JS code that runs right off.

It's a scripting environment, why not go all the way? Security issue?

Or maybe it's there and there's a secret handshake?

I spent hours this morning getting this to look right, and it still doesn't.

HTML as a user interface language is no good.

It might have had potential at one time, but we're lost in space.

PS: I used a table to get the Submit button where I wanted it.