Passing through Grand Central today on my way to lunch at Naples 45 with Rich Ziade of Arc90, I got a glimpse of the new Apple store. 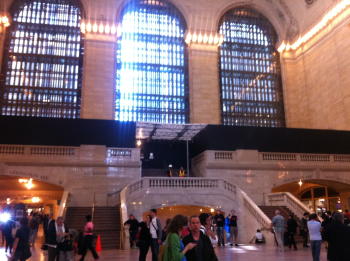 As you can see they've got the whole thing enclosed in a black box so you can't see what's coming.

I expect to be waiting in a few lines here before it's all over.

The web presence for ideas

It's hard work advocating for users.

The industry will have no part of it, they see their interests as being counter to the interests of users (at least in actions, if not words).

And users are only slowly realizing that it really does matter who controls the web presence for their ideas.

Om Malik posted about this yesterday. All the little atoms of content we leave all over the place, how will they be unified, and what do the tools look like. Not the messy messes we use now that are good at editing pages and posts (a process that started 12 years ago), but the amalgamations of these atoms. It is possible to do. But it won't be the current version of the tech industry that will discover and then implement this, they're looking in the wrong place.

Google-Plus might be wonderful. Some people, including my longtime friend Robert Scoble, love it.

The Google-Plus advocates say they don't want an API for posting because that would open the door to a harmful flood of tweets.

Says JR Holmes: "As a former user of the nearly abandoned Google Buzz, I know to well what happened when Google made it too easy to bring Tweets into their early social network." Read the rest of his post. It's worth understanding his point of view.

But now look where he put his ideas.

I wonder if that link will work in five years.

Why not put your ideas in your space and post a link to them in Google's. That seems the best of all possible worlds.

And Google, caring about data independence, and being a distant fourth to the three market leaders, might want to do something to upset the cart for the other guys. Like allow for the possibility that not all good content resides on their servers. Even embrace the idea.

Big companies have a way of walking away from their silos. We all know that by now. JR is talking about Buzz, which is a ghost town (I hear, I never go there).

I wrote in a comment in reply to JR over in Google's space and reproduced here:

"Maybe you haven't considered the good stuff that isn't making its way into the Googleverse because this door isn't open?

"I won't put anything more than a random comment into a corporate blogging silo like this without it flowing through my tools so I can archive it and publish it in my space too. The fact that it goes to Twitter too is the least important thing about it.

"It's as if you would say "I once met someone I didn't like who arrived in a car, so I am banning all cars."

"That's the other side of the coin."