I made my first trip down to Zuccotti Park today.

Took lots of pictures and was quite overwhelmed by the scene. 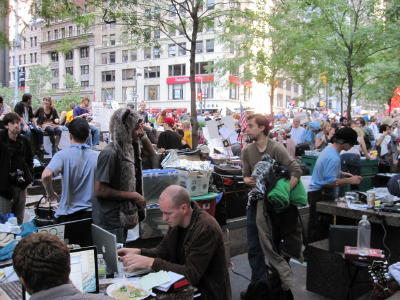 One thought I kept coming back to -- how will this end?

Maybe I was just overwhelmed.

Find out what it means to me.

I cut off comments on a piece about respect, because as often happens, people were using the comment space to write blog posts instead of responding to the piece they were responding to.

If you're going to write a blog post, why not write a blog post? They offer free hosting at a variety of places. The only possible reason that I can think of is that more people might read their comment here. So that's spam. Great. We know what to do with that.

Comments offer you an opportunity to communicate with the author, or provide an alternate point of view to something he or she said. If you talk over that person's head, and rebut someone who's not even present, well -- that's just plain disrespectful.

One person said in all seriousness (apparently) that someone else's opinion was invalid because they were probably autistic. Can you imagine, a medical diagnosis in a comment? Oy. Even if the person is qualified, how is that appropriate?

People I respect dis Richard Stallman, and I gotta say I don't like it when they do. So I stood up for him, saying his epitaph of Steve Jobs was both appropriate and respectful. As a result I got a smattering of negativism and disbelief from people who read my bit. Of course I expected it.

Since Twitter is 140-character-limited, which is sometimes a good thing, one has to puzzle it out. What does he mean? He must not understand those words, some people say. But I have a very strong appreciation for both words. If you read my web writing going back to the beginning, you'll see the concept of Respect in a lot of the pieces. I really worked this one through.

Respect means you respond to who the person really is, or what the object really is, not what you imagine it is.

So when Stallman says that Jobs made computers that put users in a tightly controlled box ("jail made cool"), he is being respectful. It's very true! I was around for all of Jobs's career, and one thing's for sure about his computers, he tweaked the extent of user and developer control as far to the extreme that he thought he could get away with. Sometimes he went too far, and it didn't work.

Stallman and Jobs in this regard are at two extremes. So when Stallman views Jobs, this is what he sees. (And he also sees a man who died, and responded to that too. It helps you feel the humanity of Stallman, he has this much in common with Jobs, he too will die.) Stallman is telling you about Stallman through Steve's life. Perfect. Totally appropriate (the other word) because that's exactly what we all do, whether we admit it or not.

I think Stallman and Jobs are of similar stature, in a historic sense.

History is a funny thing. You may find that Jobs's fetes fade out, people may not believe that an iPod was innovative in its day, a breakthrough even. Five years ago I gave a lecture to a Harvard class about creativity and started talking about Jack Benny. Highly educated kids, very earnest -- also very puzzled. They didn't know who Jack Benny was.

A friend's son asks his mom how old she was when she got her first cell phone. And the funny thing is, there probably are moms out there right now who grew up with cell phones. Even the jokes about the speed of time go out of date!

See how history sometimes paves these things over.

Right now, we're all contemporaries of Steve Jobs. But soon that will not be true.

Where Jobs was smooth and accepted, and adored by millions, Stallman is a true irritant, and I don't know why. He doesn't irritate me. I enjoy his chutzpah, and see the honor, integrity and consistency of his philosophy. And also its effectiveness. That's the thing about Stallman. You can villify or ridicule him, but you can't ignore him. He has changed things. Think about it.

There's a lot of balance to this moment in time.

A very simple thought, not of broad interest.

I use the Bootstrap Toolkit for my apps now. For example, it's in the occupyweb.org project. Anyway, now that I use Bootstrap, I breeze through the UI of Twitter. I assume it's also using Bootstrap. If not, it's using something very much like it.

This is a D'oh moment. It was the thing that was wonderful about the Mac too, back in the mid-80s. A normal person could use five or ten apps, where on the IBM PC, the other burgeoning platform of the day, people were sticking with one. Having a unified UI meant people could do more with computers.

We will see the same effect, I believe, on the web, when the user interfaces start unifying. Bootstrap is an important step in that process. It may actually become the unification.

I wanted to get a feel for what the various Occupy communities look like, and poking around, as usual, wasn't doing it for me.

So I wrote a little aggregator that pulls pictures from Flickr with the tag #occupywallst and flows them through a reverse-chronologic river.

Having something visual to go with the words makes a world of difference.