A few small changes to the home page on scripting.com.

2. The page gets narrower, fewer characters on a line.

3. Change from Ubuntu to Cabin Cardo.

4. Hot-up the whole title, not just the blue arrow. (I think some people don't know about the story pages.)

I love Atom too

If I am the father of RSS, then Atom is my niece or nephew. It's got a lot of the same genes. It has hair and a nose and a chin and feet and hands, but they're arranged somewhat differently.

Anyway, for the occupyweb.org photos page, I have to use Atom, because Flickr has features in their Atom feeds that they don't provide in their RSS feeds. Such is life in the lands of Really Simple. Sometimes it's Not So Simple. But we party on, with our boots on the ground, for a greater cause. Photos!

This time I wanted to get the category elements from the feed. So I added a bit of code to a core routine in Frontier, xml.rss.getFeedItems. It takes the URL of a feed, and returns a table structure with all the information it contains. It flattens out the differences between Atom and RSS. The upper-level code just has to deal with RSS. 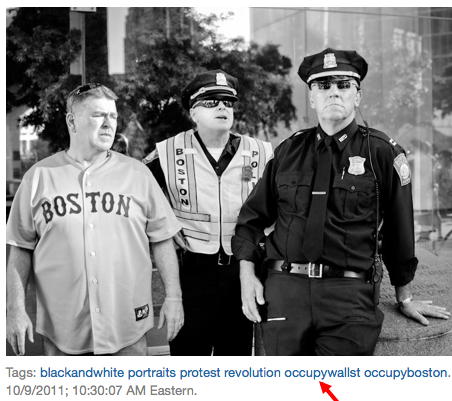 Update: It works! The tags are now displayed on the photos page.

BTW, that's an interesting picture, isn't it. It'll scroll off very quickly so I wanted to preserve a link to it. And the real point of this work is to gain visibility for the pictures people are taking. Some very talented photographers at work here, and the subject matter is historic. It's been a couple of generations since so many people in the US have taken to the streets.

Boots on the ground!

Here's a pic with a lot of meaning. 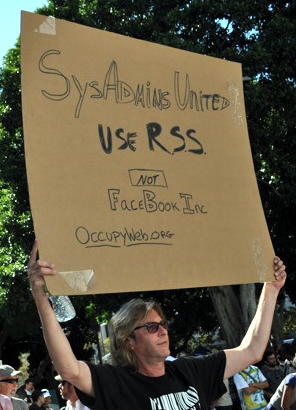 It's Adam Curry at OccupyLA yesterday, standing for The Cause.