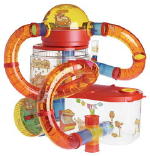 We had a wonderful symposium yesterday on the steps of Angel Orensanz as part of ContactCon. We were tasked by Douglas Rushkoff to do something substantial, and we did.

Occupy is a moon mission. A moment in time when all things are possible. When things that have been on my to-do list for decades -- get done.

It's true that RSS has laid latent for years. The tech industry doesn't love it. Why they don't is one of the symptoms of how tech is valued. It has nothing to do with the design of RSS (though they often say it does).

The problem for the tech industry corporations is that RSS disempowers them. It makes them commodities. And if that's what they are, they can't command a premium in the stock market.

The value of tech companies is a function of how much they control what users see. The more control the more value. Companies like Apple, Google, Facebook and Twitter are turning this into an art. Apple, through their stores. Google through search. Facebook and Twitter through their timelines. This isn't wild politics, it's the dream that Internet users are eventually going to come awake from.

An aside: It's funny that people are aware of the privacy invasions of Facebook, but they don't see the other side of it -- how Facebook controls what you see.

What you see is what they want you to see. (Almost sounds Buddhist doesn't it, but it's actually a simple economics statement.) RSS counteracts that. It gives the power to determine what you see to the people you choose. By having multiple sources of input you can triangulate. Figure out for yourself what the truth is. Whether they tell you so or not, each of the corporate media companies agree to certain things that they won't report at all. The Occupy movement has had a front-row seat for this, while demonstrations with thousands of people go unreported by the media. So do you think Facebook plays fair with showing your updates to other users? We don't know their algorithms. And every peek we've had into this confirms the belief that we're really just spinning wheels for their profit.

If all the data on the Internet flows in a format that everyone understands, there are no limits to what can be built with it.

This is how new layers come into tech. I saw it happen when PCs came along and gave power over data to users. Graphic UIs made it possible for non-technical people to use them. The web opened up the data again. That pesky tech industry keeps establishing their control, only to have it taken away from them. We're there, again. I believe.

And btw, this is of course not bad news for the tech industry. Every time their lock-in gets busted, the industry grows by an order of magnitude.

PS: The reporters probably will say that I push RSS because it's part of some get-rich-quick scheme. For who, I don't know. I wanted to start businesses around RSS, but my products just spawned an industry and didn't make me any money. Nowadays all my software is open source. So if someone throws that particular kind of mud, ask them to back it up. Maybe I'm missing an opportunity to make a lot of money!

PPS: The professional reporters didn't like that bloggers gained access to the DNC in 2004 (I was one of them) so they made fun of us. That's what resistence to change looks like. On the other hand, some saw the change as inevitable.