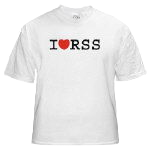 Presumably Microsoft looked at the competition and saw that they were all really tight on how apps get to the surface of the watch or band, to the wearable display. Lots of hoops to jump through.

And since our product is late-to-market and Microsoft isn't exactly on the mind of most devs these days, how are we going to make our product useful, even though we can't get much support from devs?

Answer: Open it up. Make it a lot easier for content to flow from the net to the wrist.

So, if we're going to open it up, should we invent our own format, or use an existing one? In the past most big companies would probably choose to invent their own. It employs more programmers, and fits their macho image, we're so big and powerful of course people will do what we want them to.

Or, we could remember that we're trying to open the pipe as wide as possible so the barriers are as low as possible. There's already a lot of know-how in RSS-Land, and people can trust that it isn't going to change, they aren't going to wake up one day to find out the feature they depended on was deprecated.

It's really not brilliant, it's just a bit exceptional that a big company would let their ego down a little. However, it's not so uncommon these days. Apple just announced their news product would be based on RSS. Facebook is building on RSS in their new news product. I think at some point in the last couple of years the tech industry decided to stop fighting RSS and just use it, which they could have done a long time ago of course.

As the Supremes used to sing: You can't hurry love, no no..