Do people still use libraries?

John Palfrey, a former colleague at Berkman Center, has a new book about the importance of libraries in the age of Google. Yesterday it got a short writeup in the NY Times. I haven't read the book yet but I plan to.

When I was a kid, I spent a lot of time in the Queens public libraries. Most often in a local branch, but sometimes when I needed access to more information, particularly microfilm of old newspapers, I would go to the central library in Jamaica. It was a long bus trip, so I must have had good reasons to go.

I also went to the library as a sanctuary, a way to get away from difficult situations at home. I suspect a lot of kids used libraries this way. A place where the adults were friendly, where it was their job to help you, and they really seemed to enjoy it. Librarians helped cultivate my interest in knowledge, something I am very appreciative for. The librarians also took us seriously, something a lot of adults don't do. We fail to understand that kids are real people. We get confused by their cute faces and small bodies, their childish enthusiasms. The librarians' job was to encourage the intellectual seeker and explorer in every child.

In college I spent a lot of time at the main library at my school, as a quiet place to read on campus. I didn't really have a good place to study in the various apartments I lived in. Maybe that's still true for college students?

These days I don't spend much time in libraries. Sometimes I go there to write, because it's a place that gives me ideas, but all the information I would get from a library I get on the net. Of course it's a lot faster and easier. What's missing on the net is serious collaboration. There isn't a place on the net, that I know of, where people are serious, where they try to do their best thinking, and come with open minds prepared to learn from others. Most of what you see are poor attempts at humor, outrageous political opinions. So many examples. This morning a friend on Facebook posted a link to a serious story. Every comment under it was a one-line "joke" none of which were even slightly funny, imho. This is the norm. The net is where the idea of Trump as president originated, where it thrives. I want to go some place where the idea of solving problems collaboratively is on-topic, and snark is frowned on. The net has great reference works, but it isn't a great environment for serious thought and discourse. As one of the early Internet "utopians," I never imagined we'd get to this place.

Perhaps this is the future role of the library. It's a physical place. In the past it was also the place to seek information, when information had a physical embodiment. But now that information has been disconnected from books and microfilm and stored digitally on disks and SSDs in the cloud, what's left of the library is the philosophy and people. They are still open meeting places for people.

I have to make some trips to libraries to see what's going on there in the evenings and weekends. Who's there and what are they doing? What do librarians think the role of libraries are? For me, once, they were incredibly valuable places. Do people still use libraries?

Lots of interesting ideas in the comments on this post!

One thought came to me, how about putting a podcast studio in every library?

People could come to the library to interview family members, to record their stories, to be saved by the library.

Which led to the idea of a network of libraries hosting blogs for everyone, using rules that are fair for people, not designed to create profits for tech investors. The stories have so much more value than the few pennies they make for tech billionaires. It would be great to have a public institution that helped people tell their stories, without any conflicting interests.

Maybe this is something Bill & Melinda Gates would fund, following the example of a great American philanthropist of the early 20th century. It seems it's time for an update to the concept of the library. 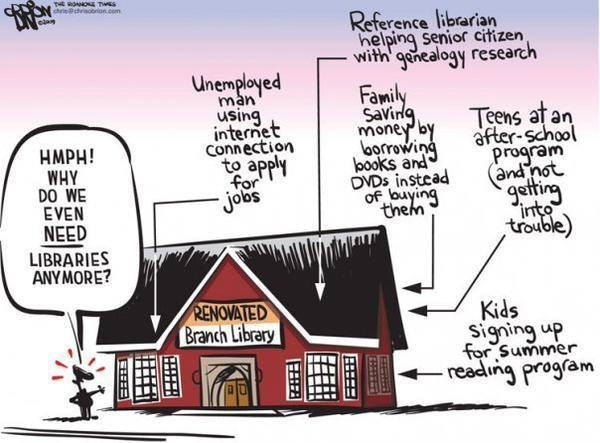