Hot-hot bike whew it was hot ya

Can you see the heat? 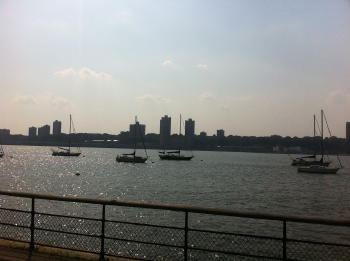 And a huge headwind going uptown.

Over on Google-Plus, Tantek Celik asks if Bloglines was the first web-based RSS feed reader.

The first was my.netscape.com, which according to Scripting News, was first available on February 11, 1999.

Archive.org has a snapshot UserLand's site from 1999, but seems to have lost their archive of my.netscape.com.

Netscape took the approach more like the one My.Yahoo, Bloglines and Google Reader took.

Scoble, my longtime friend, and someone whose chutzpah I admire, says that Google-Plus is making Twitter boring.

He says Twitter should evolve to be more like Google, but I disagree. Twitter could tweak a bit here and there, fix performance bugs, clean up the UI where possible, remove limits. But beyond that, they should just add hooks and callbacks that allow new stuff to be integrated to what they have. And they should do what all maturing tech companies should do -- get into services and investment banking.

It isn't until a technology becomes boring that it becomes truly useful. Because it's the things people do with tech that are interesting. Tech for its own sake doesn't go so far. What I want is tech that fades into the background, serves as a stage for the ideas of the performers, the people.

Who ever said that the stage at Lincoln Center is interesting? Maybe for the first few days. Then you think about the acoustics. The comfort of the audience. The way the creative people feel about it.

Same with a baseball stadium. I went to my fourth game at Citi Field this weekend. I'm starting to get over my bitterness over the thoughtless destruction of my beloved Shea Stadium. I appreciate the cushioned seats, and the beer they bring to your seat, and the great views you get. I don't like so much the money you pay for your seat, but what the hell, you can't have everything.

As with Twitter, you want the stadium to be boring -- so the players can be exciting!

Twitter has been interesting for far too long. What they should want now is to be used as an almost invisible, taken-for-granted but indispensible piece of the workings of the Internet.

It's way past time for it to be the precocious upstart. It's used for all kinds of mission-critical communication. Reliability would be a better measure of its success over interestingness.

PS: We should all write posts that begin Dear Scoble.