I don't use Google Toolbar in Firefox

But if I did, this announcement from Google would be chilling.

Nothing like being a pawn stuck between two giants that are fighting.

Webmonkey: "Imagine trying to build a house and your hammer decided to re-invent itself every couple of weeks, sometimes disabling your screw driver in the process and other times adding a pair of pliers you don't need. That's pretty much where web browsers are at today."

Yes indeed it was hot. 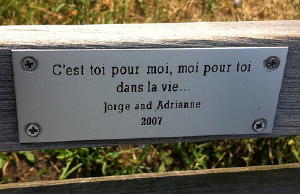 Dripping sweat as I write this but feel a tremendous sense of accomplishment.

Cowboy-up and pay your taxes

I don't want to brag, but the Bush Tax Cuts made me a bunch of money.

Sometimes I can't believe how little you pay in taxes on what I think of as windfalls.

A windfall is fruit that's laying on the ground. The wind blew it off the tree. Pick it up and sell it. Hard work! (Not.) And believe it or not the taxes you pay on that kind of stuff can be a lot less than you pay on "ordinary" income. The money you work for.

My parents and grandparents were refugees who lived through the Great Depression, so I know the value of an honest day's work. Too well. It was drilled into me at a young age that being productive was everything. My parents wouldn't ease up on me until I got with it and worked. And even then I was still a bum.

We never had long pondering talks about the meaning of it all. Work. Work. That was what it was about. Are you working? Why not?

When my grandfather, Rudy Kiesler, asked how's business, I'd say "Busy." He said "Gut" (which meant good in his Eastern European way of speaking). So I'm not one of those elite dudes who doesn't know how to work. I do.

And I know the difference between work and a windfall.

I got news for you. If you make more than $1 million a year, almost all of it is windfall. No one can work that hard.

The best piece I read recently on all the crap about taxes from the Repubs came from AnnMaria who does business in North Dakota. Stop reading my stuff and read her piece: Quit Being A Dick, Cowboy Up and Pay Your Taxes.

Then think about that as an ad we can produce and run on the cable news shows, esp on Fox.

Cowboy-up and stop being a crybaby. Your country needs you to give more, so you know what you do -- you shut up and give more.

Maybe those of you in JesusLand whose families came here in the 1800s have forgotten what a blessing this country is. Now would be a good time to remember. Tell your congressman to let Uncle Sam off the hook. And we'll live to fight another day.