Looking for an XXL Mets cap

I've got an XXL head, and I want a Mets baseball cap.

The best-fitting hat for me is a Flexfit.

Anyone know where I can get one??

Update: I bought one at BigHeadCaps. Thanks to Seth Mason for the pointer.

Serious heat wave in NYC, and the bike lanes were a lot easier on the nerves. 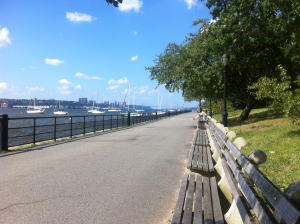 But one bottle of water was barely enough.

Still the muscles stay nice and loose in the heat.

Now seems a good time to mention that, at my turnaround point, there's a park bench, with a plaque: "In memory of Renee Glaser. Passionate journalist, citizen, reader and Yankee fan. A dear colleague and mentor who will not be forgotten."

Her bench is in an absolutely wonderful spot. Behind it, a picnic area, with shade trees, and a path that leads up the hill. It's just north of the 79th St boat harbor, and a nice restaurant. It must be lonely there in the fall, winter and spring. But in summer it's bursting with life.

I'm not left or right

But if you're not, you have no say in what happens to your country. This is so fucked up. It's not in the Constitution. It's complete fucking bullshit.

I could be a member of the Green Party or the Skier's Consortium or the Urbandwellers or the Cowtowners. And no one would care what I think. Supposedly.

A friend asked what would be my call to action.

2. Pass the debt ceiling. No new taxes. No cuts to anything.

4. Do your fucking jobs.

5. Maybe we'll let you go back next year.

PS: I'm a member of the American Voters Party. How about that.

Marco Arment wrote a post that he was sure I'd like. He was right about that. I did like it. Very much. Go over there and read it, and thank him and David Karp for making a Tumblr good blogging silo, one that allows users to own their identities.

I gave pointers to all these things to Google, in my profile. It'll be interesting to see if they have or write crawlers to use this information and distribute it to others.

Also, many years ago, I wrote an invitation called the Googlish Way to do Directories. It would still be a good idea if Google found a match in an OPML file to display it as a directory. But I suspect that since Google didn't invent it, they won't support it. They're a lot like Microsoft in that regard.

Not like Apple, though. I don't like a lot of things about Apple, but one thing I do like is that they've generally embraced formats I've created when they gain traction. Probably mostly because they employ Steve Zellers.

There are a handful of people in our midst, I think Apple called them round pegs in square holes, that may make a difference in the rush to corporate blogging silos. Marco, Fred, Anil, Steve are some of them.

Have the courage to stake out your spot on the open web.

Fill it with delicious treats, and connect it to others.