Twitter was better when there were fewer people there.

Before it was so random. Before there was so much spam. When everybody on Twitter was likely someone I wouldn't mind hearing about, and from.

It's probably why people are liking Google-Plus now. It's small. Approachable. Filled with people you know.

I had this thought when I looked at how competent Twitter is these days. But the question is, do we really need something that does what Twitter does. Do I need a service that can serve people with 6 million followers? (No, I don't follow anyone with that many, and I myself have less than 40K followers.) Do I pay attention to the tweets of even a fraction of the people I follow? (No, no one could.) With Twitter, I think there's no doubt that it would be better if it were smaller.

But who cares as long as there are no ads. But they're coming, soon. Maybe they'll solve the problem by letting people pay them, say $25 per year, for an ad-less Twtter.

That would help keep it from fracturing.

Maybe Obama will withdraw from 2012 race

I'm just old enough to remember LBJ withdrawing from the 1968 Presidential election, opening the door for Richard Nixon to become the next President. His reasons were pretty clear, he had bet his presidency on Vietnam and lost. The war was getting worse, and would get worse-still.

Obama is so deeply mired in this mess with the deficit. Perhaps the best thing to do is resign himself to being a one-term President and let the Democrats nominate someone else, who can run on a different platform. "I'll kick ass for the voters," instead of what Obama would have to run on "I sold out to the Republicans." Then 2012 can be a referendum on whether we want to turn the country over to the chaos that the Republicans have wrought, or fight back.

We're getting close to the point where the kindest thing the President could do for his country is to become a lame duck. Not quite there yet. But the next few weeks should tell. If he lets the country default, there's no way he gets re-elected. We're going to need someone really strong, with great leadership skills and someone who can say no to the Republicans in a way that they get the message.

God forbid he doesn't move aside, we could be singing Hail to the Chief to President Romney.

Since I live nearby, I snuck out after 1/2 hour of talk about advertising on blogs, which was very interesting (no sarcasm) but got rather detailed. As I was sitting there I was thinking that I probably could use the time better on my bike, so I got on my wheels and rode crosstown then uptown.

Big headwind on the way up, so that's where I got my workout. Took a really nice video of NYers out on the trail at the usual turnaround point, just north of the 79th St boat basin.

Big tailwind on the way back, so smooth ride. Feel great. The conference resumes at 2:30, just enough time for me to have a snack before heading back. Funny how it doesn't make a diff whether it's headwind or tailwind or nowind, my rate on the trail is betw 10.5 and 12.5 mph.

We're having a hyperlocal conference at NYU today, and it's good!

Hard to get a word in, so I'm going to take notes here. 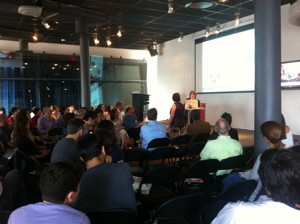 In defense of hyperlocal, communities have long-term issues, just like cities and countries do.

For example, in the East Village, there's gentrification, a sense that the history of the area is being deleted. For me safety of bike riding is an issue, as it is for other residents.

There are a lot of journalists here, and they tend to think journalism is the big deal. I think blogging is a big deal. And no, I don't think they understand what blogging is. But that would take a lot of talking to explain and probably wouldn't create much understanding.

The question of how to involve the community is still the wrong way to look at it. The site is of the community. Give everyone who lives in the community a blog of their own and make the front page a curated aggregation of the blogs. At first yours will be the only one, but if you gain traction it won't be that way for long.

Jay asks people to think in terms of 100 percent coverage, a familiar theme of his. The people who think it's all about journalism grab the mike and snap right back that it's important to "involve the community." Bzzzzt. Wrong.

I did get up and speak and said all this, and added that when the comments get to be too much it might be time to offer everyone a blog on your domain, and gradually transition to a Kos-like approach. That's what we did in the early days of Scripting News. A lot of the original blogs formed out of the discussion group on userland.com.

During the break the question came up about this bit from a previous post: "Be sure you control your own publishing and distribution. It must be tempting now, and it's likely to get more tempting in the future, to accept the offers of the big tech companies." Did I mean that people shouldn't do syndication? No, that would be a weird thing for a guy who pushed RSS as much as I did to say. I meant don't depend on Facebook, Twitter and Google to be your publishing and/or community system. For all the reasons in the piece. These are not good platforms for journalism or blogging.