This weekend there were two notable bike deaths in NYC, and I gotta say that spooked me. But this afternoon, I got on the bike anyway, and ten minutes into the ride, I was in the zone, and at the end of the ride, as usual, I didn't want it to end.

I realized the other day that for me biking is like skiing, but only the good stuff, none of the schlepping and none of the pain. Skiing is a lot of work and relatively little time enjoying the thing you like about skiing. Okay biking isn't quite the rush of a great run down a steep mountain with great snow and a clear blue mountain sky, when you've done enough working-out during the off-season.

And there's nothing like the view from the top on a bright Utah day. 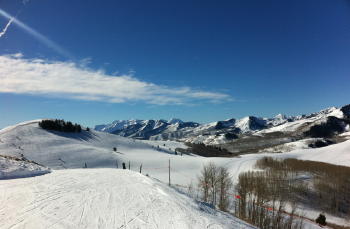 But then again biking isn't struggling to get the boots on, or the feeling of lameness in your legs 3/4 the way down the slope realizing even if you don't want to you have to make it down the remaining 1/4. And it isn't shivering on the lift on a cold snowy day, trying to cover every square inch of your skin, and realizing there's a place you didn't get (but it's too cold to take your gloves off to try to fix it). Or trying in vain to keep your goggles from fogging up. Or ice. Or crowds. Or snowboarders.

And in all my years of skiing, and there are a lot of them, I don't recall ever feeling at the end of a day that I wish I could keep going. Usually I'm exhausted and in pain and totally ready for the end. And we joke that the best feeling of the day is taking the boots off.

You don't share the slopes with skiers who weigh tens of tons. On your bike you do share the road with trucks and buses. (Buses are the worst!)

But both sports give you the feeling, in the best moments, of weightless soaring. But biking can be done with five minutes of prep, starting right outside your front door.

Today's ride was perfection. The weather simply could not have been better for riding. Low 90s. Nice breeze across the trail from west to east. No head wind or tail wind. Not too crowded. The best.

The next in a series of podcasts about stuff going on in my nerdly world. Or is that worldly nerd? I have no idea.

In this one I decide to take the bull by the horns, and start to explain why the new approach to outlining is working out so well for me, this time.

The last ten years have been the era of Edit This Page. Now we're escaping the limits of the page, and bouncing around between whole sites in a single document.

When our machines grew to 1/2 gig of memory we forgot to recalc our assumptions of what a document is. Our thinking is about 15-20 years behind the capability of our hardware. Pushing fear aside, we're now ready to grow! Hey.

A little more, at the end, about Dropbox.

The worknotes are mentioned, as are the placeholders.

This podcast is 37 minutes long.

Saw a note from Ross Mayfield on Twitter about a Google-Plus vanity URL shortener, gplus.to. He says it will go viral because it fills a gap. I thought the same thing when I looked at it.

Usernames on Google-Plus are long strings of numbers. Obviously names should be mnemonic and memorable. Bravo for the entrepreneurial spirit for fixing this so quickly.

So -- what will Google do? (To paraphrase the title of Jeff Jarvis's book.) They are active acquirers. Maybe they'll buy these guys? Viewed from the developer's perspective, do they expect Google to buy them? Could be a marriage made in heaven.

Or, perhaps Google will re-invent? After all they must have thought of ways to give users short memorable names? It's not that hard a technical problem, evidenced by the speed at which gplus.to showed up (less than a week after launch).

If they bought them how much should they pay? And how will Google employees feel about a developer getting rich from what they will surely see as a few days' worth of work, when most of them aren't likely to get rich for working much harder for much longer.

These are the usual face-offs between developers and corporate platforms.

It'll be interesting to see how Google deals with these questions.

Also if you're aware of any instant add-ons to Google-Plus, please post a link in the comments, below.