Look at the sky! 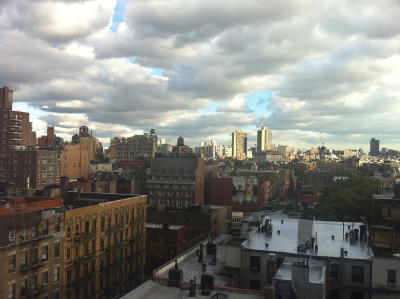 The projected high today was 79, but on the ride it felt more like 59.

Pretty strong headwind made the trip north a slow-go, but I flew back home.

A video I took at the turnaround point at 79th St.

My fifth time through The Wire

The Wire is still the best TV show ever.

I like it so much I've watched all five seasons five times now.

And while I remember every scene, and practically every bit of dialog, it had been long enough since my last complete viewing that I forgot how everything turns out. Who is the police commissioner at the end of the last episode, for example? I didn't remember. What was the ultimate fate of Avon Barksdale? Same deal.

But there are some characters whose exits you never forget. Like Snoop, Cheese, D'Angelo Barksdale, Stringer Bell and Omar. To name a few.

There are so many cool moments, maybe the best one of all was when the scientists at Quantico give the profile of the serial killer and it fits McNulty to a T.

I hadn't watched The Wire since its creator David Simon went on a campaign to educate the rest of us on why we need to bend over to save the newspapers. How incongruous that is, when he portrayed the news orgs exactly as fubar as the unions, police, City Hall, schools. The recurring theme of The Wire is a few people want to do good work thwarted by those who just want to get by or get ahead. You know it's the same way in tech. They would have you believe that it's all about excellence, but it's not. The little bits of great work happen the same way they happen in Lester's police department. By sneaking something in the back door while the bosses' attention is elsewhere.

With that in mind, I feel more confident that getting the big institutions out of the way so that the Small Picture can rule is the way to go. I'd love to have a beer with Simon some day and go over this with him.

At least we (probably) agree on one thing, The Wire is great theater.

The most touching moment: Kima sitting in the window with Elijah, saying goodnight to the neighborhood. Close second, Beadie forgiving McNulty for being so McNulty. Slim Charles paying off Cheese.

This time I downloaded sub-titles from the net. This helped a lot, because a lot of the dialog was meaningless to me the first four times I watched. I don't speak the dialect of English they do. But after so much listening to The Wire, I have all their voices and all the things they say running through my head 24 by 7. You feel me?

For some reason Marlo Stanfield makes me think of Matt Mullenweg. Go figure.

Trivia: There's at least one actor who played roles in The Wire and Breaking Bad. Do you know who it is??

One more thing -- maybe the best thing about The Wire is all the different characters you can try on. There are some who I don't feel at all like. Cedric Daniels and his wife, for example. Brother Mouzone. But there's a little bit of McNulty in me, and Stringer, and when I fantasize -- I'm Marlo Stanfield or Omar or young Michael. But maybe the most heroic characters on the show are Kima and Bunk and Prezbo. Or Bunny or Bubs. Bodie. Prop Joe.

How about that -- which Wire character is most like you? Which one do you admire the most? Which one gets on your nerves? There's a lot of food for thought here.

Update: They're teaching The Wire at Harvard this year.

Why the netbook category is fading

I don't know about everyone else, but if they came out with some new features, or reduced the size, or even made one that looked sexier, I'd buy another netbook. Fact is, they haven't done any of that. I already have a netbook that works.

I understand that the manufacturers have their hands tied by restrictive licensing by Microsoft and Intel. They can only ship Windows on machines with 160GB hard drives, with 1GB of memory. There's probably also a limit on CPU performance.

Too bad, because a nice tablet computer would be an Asus Eee PC with a bigger screen and no keyboard and Windows XP. Or if they had a powerful enough CPU to drive the kind of display that's in an iPhone 4. Or even the previous iPhone.

The netbook was a winner, but it's fading out quickly due to lack of anything new or fun.