Google New is great, but..

Google New is the "one place to find everything new from Google."

Great freaking idea and thanks. Except for one thing.

My first piece on "net neutrality"

As far as I know I've never written about net neutrality on scripting.com.

So this is the first time.

I've never written about it because I didn't know what to say.

I really don't understand the issue. But then today I received a press release in email saying that a lot of music stars, along with moveon.org, are making a stand in favor of net neutrality. How are they doing it? By posting messages on Twitter and Facebook.

Here they are taking a stand against corporate ownership of public media, and they use corporate media to express this point of view. No that's not how you do it. Wrong. Hypocritical. Clueless.

You have to be consistent in your story. If you don't want corporate ownership of media on one level, you can't support it on another.

Create a blog, put it on your server, hook it up to the net through one of the companies you're protesting against (that's what's worth protesting, your limited choice), and speak your mind. Then, if you must, tweet links to those stories and share them on Facebook.

Farewell to the phone

I was re-reading a piece I wrote yesterday and focused for a minute on the picture of the telephone. 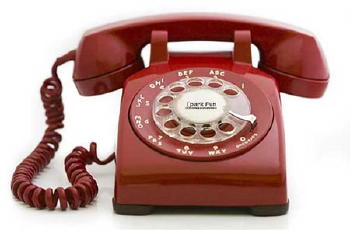 I realized that there are now people in this world who, if you showed them that picture, would not be able to explain how it worked or maybe even what it was. Given a few more years, maybe as little as ten, and the majority of people will not know.

Then I think of relatives who are no longer with us who would have no context with which to understand my iPhone or Droid.

There were phone "booths" in public places like airports and subways.

There was something very simple and even elegant about the virtuality presented by the world wide phone network. IDs were strings of ten numbers which people memorized. In other ways it was actually quite complicated. Several people would map to a single number. There were all kinds of social conventions that went with it, like: "I'll get it!" or "She's not here now" or "Can I take a message?"

This was expecially visible when I re-watched a favorite movie, Minority Report. Directed by Steven Spielberg, based on a Philip K Dick story, starring Tom Cruise, Colin Farrell and Max von Sydow. It's set in 2054. The user interface of the computer Cruise uses is now reflected in the touch interface of the iPad. Whether they got the ideas from the movie or not, I don't know.

At one point, near the end of the movie, the phone rings. It's a tiny little thing on the banquet table. A secretary picks it up, answers, and tells her boss it's an urgent call on his private line.

Hey they got the form factor right (at least partially, it looks like a Bluetooth headset) but the social conventions they describe are long-gone. And it's only 2010.

Sometimes when people say things change very fast, they're right. Some people still call the hand-held devices phones. But they're not phones. Phones are fading fast. Soon they won't exist.