Riding along at a good clip, must have had a tail wind. Just north of 54th, a ramp comes off the West Side Highway and into the cruise ship terminal. Crossing the Hudson River Greenway bike path. The cars have a stop sign. The bikes don't stop.

Usually there's a cop there making the cars stop, to protect the bikers, but there was no one there today. As I round the corner, a car is speeding up, going through the stop sign, driver looking me in the eye. I hit the brakes. Go over the handlebar, and fall in a pile of Dave. Stunned. Nothing broken. Scraped badly, bleeding. The bike's front tire ruined.

There's much more to the story but I don't have the patience to re-live the drama right now. Never mind. I'm hurting tonight. And tomorrow I'll be black and blue. No riding for a while.

PS: I was riding too fast for the spot I was in.

I've been following the RSS section on Stack Overflow for the last few months. It's been really interesting to see the kinds of questions developers have, and it's also been gratifying to see that they usually get good advice from the developers assembled there. It's a better environment than the contentious discussions that used to happen on the syndication mail lists.

An answer to a fairly common question, written by Derek Park, would have been what I would have said if people were listening, back when Atom launched. I'll just quote it here and say that I mostly concur. 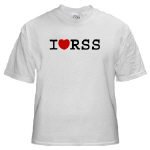 "The fundamental thing that the Atom creators didn't understand (and that the Atom supporters still don't understand), is that Atom isn't somehow separate from RSS. There's this idea that RSS fractured, and that somehow Atom fixes that problem. But it doesn't. Atom is just another RSS splinter. A new name doesn't change the fact that it's just one more standard competing to do the same job, a job for which any of the competing standards are sufficient.

"No one outside a fairly small group of people care at all which standard is used. They just want it to work. Atom, RSS 2.0, RSS 1.0, RSS 401(k), whatever. As long as it works, the users are happy. The RSS 'brand' very much defines the entire feed category, though, so on the rare occasion that someone does know enough to choose, they will tend to choose RSS, because it's got 'the name.' They will also tend to choose RSS 2.0, because it's got the bigger number.

"RSS, and especially RSS 2.0, are very much entrenched in the feed 'industry.' Atom hasn't taken off because it doesn't bring much except a new name. Why switch away from RSS when it works just fine? And why even bother using Atom on new projects if RSS is sufficient? Switching to a new feed format mostly means extra time spent learning the new format."

Before anyone suggests that I'm looking for a debate, I am not. River2 supports Atom, as does all my other RSS-processing software. Atom is here to stay. But it didn't solve any problems, it just added another feed format that developers have to support. 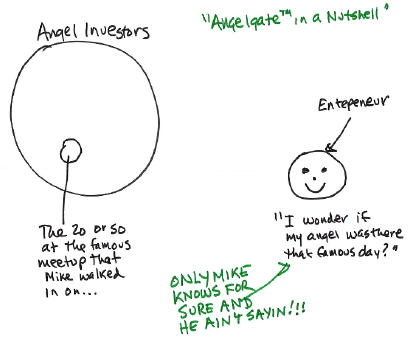 I was talking about Angelgate earlier today with an entepeneur (the new spelling) and we were talking about what a difference it makes that we don't know who was there when Mike Arrington walked in on the meetup of angels apparently colluding in an illegal fashion.

To see the difference, let's do some numbers.

Suppose there are 150 active angel investors in Silicon Valley.

Suppose there were 20 angels in the room on the day in question.

That means 130 angels weren't there.

Suppose you are one of the angels who wasn't. What do you do?

Tough choice. You could write a letter to all your friends and hope they leak it to TechCrunch as Ron Conway clearly did, and hope that TechCrunch runs it.

Or you could call up all your contacts and say you weren't there. But then they would wonder. I wonder why he felt the need to do that? They'll probably think I was there if I deny it. Better to say nothing.

Now imagine that there are 1000 entrepreneurs in Silicon Valley out looking for money. Suppose you're one of them. You've had meetings with a bunch of angels and you're wondering if the guys you've been meeting with were in the collusion meeting that Mike reported on? No way to know, since TechCrunch didn't say who was there.

So the net-effect of the story is to tarnish the reps of 150 angels, including 130 angels who did nothing wrong.

And to introduce doubt in the minds of the 1000 entrepreneurs.

If you're one of the 130, you're probably begging Mike to publish the list right now.

And if you're an entrepreneur you're probably begging Mike to let you know who they were, so you know not to do business with them.

No matter what, guess who's at the center of all investment conversations in Silicon Valley right now?