One of the last summer-like rides?

It was in the upper 80s today, glorious weather for a ride. Perfectly sunny. The trail was mostly empty. Guess everyone was at work!

One thing I learned today is if it feels like there's no wind riding north that means there's actually a pretty good tailwind. You feel it on the way south.

Regardless, it was a great ride. Tomorrow will likely be just as good, but then Saturday or Sunday the weather turns autumn-like and it's time for long sleeves.

Here's one of the first HDR pictures that's really worth it. The Hudson River at 100th St in the afternoon heat. Click through for the full effect. 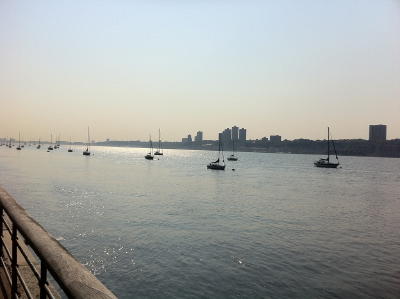 A couple of small items between major posts in the continuing thread about Rebooting RSS.

1. Ryan Tate, in a comment here, says he doesn't see the efficiency in my proposal to shorten names.

2. Jon Udell on the idea of rebooting RSS, among other topics.

A general observation. I would love to have dinner sometime with Jon and Ryan, and let them try to poke holes in my plan to reboot RSS.

Along the way I might repeat a few times the why of it.

The why of it: I want to create, out of RSS, something like Twitter, but not locked up on one company's servers. Call me an opensorcerer or a rastafarian, but I like networks that aren't controlled by one company. Esp not a tech company.

To Ryan's concern. He says he can subscribe to scripting.com now (although I'm not aware of any place you can do that). I want him to be able to follow davewiner, the same way he would on Twitter. But have it resolve to the URL of an RSS feed, invisibly.

That last part -- invisibly -- is super-important.

To get there, I need a way to map names to URLs.

Bill Seitz asks which of my many feeds would map to davewiner?

Good question. You should come to the dinner too Bill!

But you don't have to wait to get the answer.

It would be the same feed I currently send through Twitter.

As I said in an earlier piece, not in the Rebooting RSS thread: choice and ease of use are inversely related. The more you limit choice, the easier you can make it. I have to pay a price to be part of a simpified network. I already pay that price by being part of Twitter's network. Now I want to renegotiate that. I'm still willing to make a choice, and only have some of my stuff flow through the canonical davewiner feed. But I know that any element in that feed can point to content that would usually be in another feed. I give up some flexibility to be part of a network that's easier to use.

What kind of news system...?

Twitter Corp seems to have figured out that it's at least a dress rehearsal for the news system of the future. That's good because that's what the potential is.

But what kind of news system says "Sorry we did something wrong. Try sending your tweet again in a minute" when you try to post a piece of news to it?

News is about what's new. Not what was new a minute ago. You can quote me on that (not that it's a great revelation).

Twitter once was cute, but that's in the past. Pushing around its partners doesn't make you warm and cuddly, and more and more they're pushing around users. And it's not okay that they're making a bid for exclusivity on the role of News System of the Future, and they can't even keep their servers running properly. Either you deliver the benefit of being the sole provider, or sorry (to paraphrase their error message) get the fuck out of the way.

For what it's worth, the bit of news I want to pass along is a story told by a Wallmart exec about how and why people buy baby formula at midnight. It's a parable for our times, not a happy one.