Interesting blog post about the journalist's toolkit for this day and age.

Except that's way too much to carry, esp if you have to move around a lot, or if it's hot.

I learned a lot about this covering two Democratic National Conventions in 2004 and 2008.

I think I had it pretty well optimized by the second one.

What I brought to Denver: 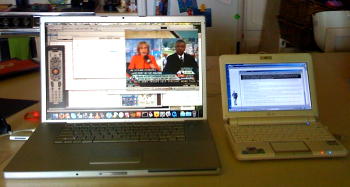 2. I carried a tiny Asus Eee PC. It was even smaller than the one I have now. Another blogger had one too and we were both wearing jackets in 90-plus degree heat so we could put the Asus in the jacket pocket. It was that small. Today's netbook is too large for that. Since it only had 16GB of solid state memory, I brought an external hard disk with me. Today I wouldn't need to because the Asus has a huge internal hard drive. The Asus was the centerpiece of my tech toolkit. It was this experience that convinced me that netbooks not only worked, but were an essential form factor.

3. I had a Sprint USB modem, it worked pretty well most of the time. Today I would carry a Verizon Mifi card. But they provided Ethernet connectivity in all the working press rooms. Example.

4. I had a Canon SureShot, tiny little camera, but I wouldn't bring that today. Instead I'd carry the iPhone 4 as my camera. It has its own communication ability, and it can communicate via wifi. The Canon takes slightly better pictures, but the ability to communicate is the deciding factor. I want my pictures to be up on the net fast, and I don't want to spend a lot of time doing it. With the Canon I have to fuss around with the SD card, and while I'm doing that, I can't take pictures. Often working in very tight spaces, and have drinks in my hand and talking on the phone or texting while I'm working.

Here are the pics I took in Denver.

5. I had a small microphone that connected to the computer, but again, I wouldn't need that now because the iPhone 4 has a built-in voice recorder for the occasional podcast. Or I'd use Cinch from Blogtalkradio.

6. I brought a reporter's notebook with me as well. It helps to have the ability to write some notes quickly. Sometimes it's just too much to get the computer out and find a surface to type on. You have to sit down for that. Writing with pen and paper can be done standing up. The right tool for the right moment.

I thought the readers of Scripting News might have some ideas how to optimize the traveling reporter's geek toolkit. It's great that they're thinking about this now, here's a chance to do some real collaborating.