Today I went north, making it as far as 64th St on the Hudson River Greenway. 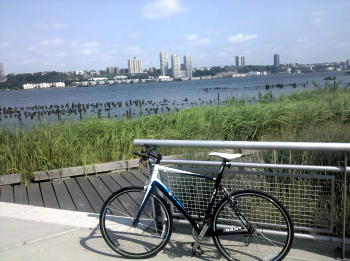 Considering that this trail runs through the largest city in the US -- it's amazingly free from traffic and hazards. The pavement is near-perfect. People generally respect the rules.

Better biking than I had in Calif where I rode along Junipero Serra Blvd some days and up Sand Hill Road others. Those were good routes, but you had to share the road with cars.

Here, the trail is just for bikes. Verrra nice!

Another major difference is -- no hills!

PS: The other thing, if I keep this up, and totally intend to -- it's going to be an awesome year for skiing. The two sports are pretty closely related muscle-wise.

I use both an iPhone and an Android phone.

Neither is what I want. I knew what I wanted when the iPhone was announced, after years of speculation, and I was disappointed that the iPhone wasn't it. I wanted a phone that ran Mac software. I more or less wanted the same thing from Android. (I would have been slightly less happy with a phone that ran Windows software, but I don't think Microsoft makes one, and I don't think they plan to. This would be a late-but-interesting zig to Apple's zag, esp if (shudder) they open sourced Windows. Don't worry, it'll never happen.)

People are boasting on Google's behalf of their prowess in being able to catch Apple in market share. It is impressive, but not as much as you might think. Apple has never tried to lock-out their competitors, they've never designed their product strategies for market share. Jobs said that in a recent interview (I think it was at the D conference). Google has been able to do to Apple in mobile devices what Microsoft did to Apple in PCs, because Apple would rather control their share of the market and have a single target defined by both hardware and software than have multiple manufacturers making a disorderly and hard-to-target market. Apple has the freedom to move the iPhone platform where ever they want. That's always been their advantage, since the Apple II and Macintosh. But they threw the captain of the ship into a rowboat for a number of years, that's why it looked like a lose-lose strategy for a while, and pundits were walking all over Apple saying they were stupid not to license cloners. It wasn't that, it's just that the people running Apple didn't understand how to drive the ship that Jobs designed. Evidence is in how well Apple is doing, even with a shrinking share of the market they defined. Share has never been what Apple is about.

Meanwhile, my Android phone is humdrum. Not as flashy as the iPhone 4. It was supposed to get all this software that the iPhone didn't because it's an open platform, but if it exists, I haven't heard about it yet. I don't think it does. The closed controlled platform, Apple's, is kicking Google's ass in apps, and will continue to, again because share isn't what it's about. Maybe Google's easy-to-use application development tool will change that. Could happen.

But Google has OEMs that are hard to corral. As long as Jobs stays at the helm of Apple, or his successors understand and use his playbook, they will never win the battle. Apple will always have a better shinier product with cooler features. Android, like Windows, will have trouble delivering a benefit to users for the hugeness of its market share.

TechCrunch has a piece today comparing Google's Vic Gundotra to a US general in its upcoming war with Facebook. It's a good, probably accurate analogy but the wrong way for Google to approach the market. It's the loop that keeps repeating. Right now we're replaying the Microsoft battle to the death with Netscape, one which, in the end, they both lost. As they do in every iteration of the loop.

Gundotra comes from Microsoft, and I'm sure remembers the amassing of all of Microsoft's power at the ragtag garage band that Netscape was. All of Microsoft's products would become web-enabled. ActiveX would bring Microsoft-only code to the web, that'll show em -- can't run that stuff in Netscape! Then their sales team bought badges on all the top sites that said "Works better in MSIE." It was really something. But the inroads they achieved had nothing to do with the might of the company. Word, PowerPoint and Excel as web tools were a flop. ActiveX was a great way to write viruses, right from the start. A Microsoft engineer admitted to me privately a year after they shipped it that it was a huge mistake (it was). Microsoft gained market share because they made a better tool for browsing the web. In hindsight the gimmicks probably hurt them more than they helped, although the pundits sure were impressed.

It'll work that way for Google too. Google Me is a brilliant name. But based on what I can see that Google engineers are promoting, it's going to have the same problems Microsoft's attack had. They're opening too many fronts and fighting too many irrelevant battles. And too many strategy taxes. It's as if Google, not knowing who is winning the war, is fighting it everywhere, just in case it turns out that's where the true enemy is hiding. That's how big rich companies that are scared compete. Everyone needs to get a piece of the battle.

I bet Google doesn't appreciate how different things are now from when they went after Alta Vista and then Yahoo and Microsoft in search a decade ago. Scrappy upstarts have huge advantages that established leaders don't. And none of these guys study history well enough to understand the stages of technology markets and companies, so none of them know what to do when it's their turn to be displaced as the scrappy upstart. Microsoft didn't know what to do (apparently the message still hasn't made its way to their CEO, but it doesn't matter). IBM before them didn't know. And now Google doesn't know. They probably should be hunkering down. Let Facebook become what they are going to become, because there's nothing they can do to stop it. Become more efficient at delivering the services that people depend on them for. If this means laying off engineers, so be it. Or turn them into consultants and help other companies build on your infrastructure. And then either start paying dividends to the shareholders, or find other avenues to invest the cash you generate.

After IBM gave up being the platform vendor, that's basically what they did -- they became a consultancy and investment banker. Microsoft will eventually move there as their investors get fed up with quarter after quarter of flat growth. Google will get there as well, but first they have to get this tidal wave of fear out of their system, and unfortunately for all of us Facebook is going to bear the brunt of it. But they're in much better position to take it than Netscape was when Microsoft attacked. And Netscape did more to erase themselves than Microsoft did, and even so -- the browser they jettisoned lived to fight another day in the form of Firefox.

If I were advising Facebook, here's what I would tell them to do.

Google is going to make the issue how "open" you are. They're going to do it by not really being open themselves, they'll have patents to cut off their competitors and upstarts, to control whatever markets they manage to get share in.

Facebook can stay steadily on its evolutionary path, or they can anticipate Google's moves and counteract them, by open sourcing huge amounts of their code, making it possible for companies and startups to launch their own Facebooks that interoperate with Facebook's.

That will leave Google with exactly nowhere to go. From there on, it's your market to do with as you please.