Light wind, made it up to the turnaround point in 25 minutes, non-stop. Short rest. Came back non-stop. I'm going to need a longer ride tomorrow, this one is too easy. Maybe up to 125th and back. 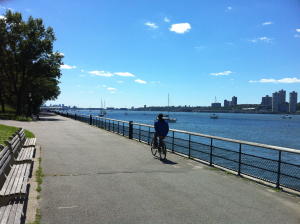 New riding shorts. These are much more sheer, they feel wicked!

New practice: Check-in on Facebook at the turnaround point.

If you're in NY today, get outside. It's one of the 10 nicest-weather days of the year, for sure.

A note about Diaspora

There's been another round of hype over Diaspora.

These guys are seriously good at the tease.

Also they're from NYU, and that's pretty amazing, in a Forrest Gump way. They started something near and dear to my heart, about three blocks from 20 Cooper Square.

The press is staying remarkably centered on the most recent announcement as if saying that they're unsure of what Diaspora is (they haven't actually said, not even a screen shot of the final product) but they're willing to wait until they get back from Burning Man to decide if it really is the open Facebook-replacement they set out to make. With the shipdate looming so close, they're going on vacation. Now that's confidence! (Or hubris, or inexperience.)

Now while it's possible for four talented computer scientists, in a summer, to make a piece of software that's so compelling and attention-grabbing, not just in theory but in actual use -- it's also far from likely.

More likely is that they buy into the view of engineering from inside academia where they confuse student projects with working systems that can survive a real-world test. For example, look at my review of Pogoplug, earlier today. I'm sure their engineers are brilliant, like the Diaspora people are. Yet when the software arrived at my desktop, nothing happened. No functionality. Welcome to the user's desktop where complicated technology very often doesn't work.

It's unfortunate that the expectations have been set so high for this project. It's unfortunate for the developers, but more for the users and other developers, who have been plugging away at this problem for years without the benefit of the attention that the Diaspora folks have gotten. Now if they fail to achieve the high expectations they've accepted, and even encouraged, they're going to take a lot of the hope with them. That's what's going to really suck.

More likely, around the time Diaspora ships, or shortly after, but certainly before the end of the year, Google will announce their open social network. That's what people will talk about. That, and the next rollouts from Zuck and Company. The amazing story of the $200,000 grant will fade, as will the glory, and perhaps the chances for creating something open that lives outside the walls of corporate Silicon Valley.

I wrote a post about Pogoplug last week and they offered to send me one for free, and it arrived yesterday.

I set it up this morning, and now am trying to use it. 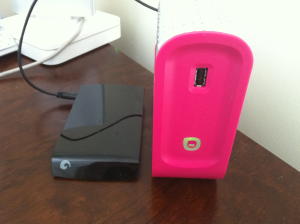 I downloaded and installed the Mac software, assuming that a folder would appear on my desktop somewhere with the name Pogoplug or something like that (maybe the name of the hard drive attached to the device), but there's no folder evident. Tried rebooting.

Noticed that there's now something called MacFUSE in my Preferences app. Not sure if this was there before or if Pogoplug installed it.

Tried reading the FAQ and looked in the Help system, but nothing was immediately obvious.

Looked at the web interface, but was pretty horrified. No way, after using Dropbox, am I using something so hard to look at.

There is an API. Plan to check into that.

Mashups of the Mona Lisa

I wanted to grab a picture of the Mona Lisa so I searched for it.

There are all these mashups of the painting, but where's the original?

It's at the center of something, everyone's talking about it, visually, but it's hard to know which is the original and which is the mashup.