The Big C vs the Big Zzzz

I was in the middle of watching the first episode of The Big C, the new Showtime series starring Laura Linney and Oliver Platt when I saw that I could watch The Zuckerberg Show on Facebook.

Things were all flipped around, because Zuckerberg was a rerun. On so many levels. It was a rerun in that here was a huge tech company doing something that was interesting only because of their hugeness. And it was a rerun because it had all been done before, by Foursquare.

It was also a rerun because it's just another loop around the tech circle. Every feature shows up in everyone's product. You can see there are three companies, Apple, Google and Facebook, at least, that are largely cloning each other.

And to the extent the Facebook announcement was interesting, it was equally sad that Yahoo and Microsoft, two passed-over tech giants, couldn't put something like this together now, if their corporate lives depended on it. And they do.

So after about 15 minutes of nauseating product annoucement from Channel Zzzz, I switched back to The Big C, which answers the question: Can you make death by cancer funny? with a resounding YES!

What a wonderful show.

You know why it's so funny -- because it's original. There are all these themes that have never appeared in a 1/2 hour sitcom because they were never willing to approach impending death this way. A character with less than a year to live can do and say things that other characters just can't, believably. And the writing is superb as is the acting.

Everything is backwards. You'd expect a show about dying to be hard to watch, and you'd expect young people on top of the world to be interesting. But the young people are boring while the dying is compelling.

If you haven't seen The Big C because you don't think death can be funny, you owe it to yourself to take a look. It's very very good.

I love netbooks but Asus is blowing it

Asus says the iPad is cutting into netbook sales.

I'm not surprised. Asus's response to the iPad has been to stop improving their netbooks. The product they're shipping now is in no way different from the one they were shipping six months before the iPad shipped. It isn't even cheaper. Maybe the battery lasts longer, but they maxed out that spec when they hit 7 hours use per charge.

They knew the iPad was coming, and they had nothing in the pipe.

That sales are dropping is no surprise. What possible reason would anyone who has one have for buying a new one?

Meanwhile this leak re a Google/Chrome OS/Verizon tablet shipping in November sounds like just what the doctor ordered. I'll buy one for sure if it's less than $500. I love buying new cool gadgets. Too bad Asus isn't offering any.

Makes sense that I have to cut back a bit the day after pushing to a new limit.

Today's ride: south to the Battery, turn around, north to the Intrepid, and back to the West Village.

Feel good, but not so much energy as yesterday. 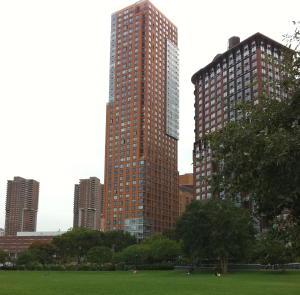 I'll get some good programming work done this afternoon.