Logging on to SMCD3GN cable modem?

I'm having no luck getting through to the web admin interface for the new cable modem Time-Warner installed here.

I need to get in there to adjust the config so I can get to my desktop remotely using a dynamic DNS address. It worked fine with the old modem. It's a pretty simple matter to program the routing table so things work properly. But you have to be able to get through to manage the configuration, and I can't get to the login screen.

The instructions in the manual are pretty clear.

They say to connect to http://192.168.0.1/ and enter cusadmin and password as the username and password. But when I go to that address, it says it's connecting, then sits there for a while and times out.

Here's a photo of the plate on the back of the modem with the MAC addresses blocked.

Do you use a Pogoplug?

I read this review of Pogoplug and then the reviews on Amazon. 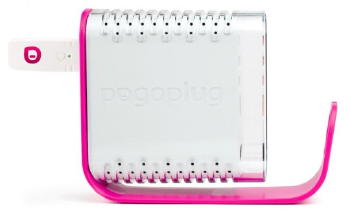 Sounds really cool. Not quite sure what it is.

Do you have one? Do you like it? Should I get one?

1. Logged into Twitter for the 187th time this morning, and was greeted with the message: Sorry, that page doesn't exist!

Problem is the page that doesn't exist is http://twitter.com/. Don't get all existential on me now.

2. I had to log into my pharmacy's voicemail system to renew a bunch of prescriptions. After the second presscription, the voice seemed very familiar. By the third I knew who it was! It was the male voice from the "I don't care" viral iPhone 4 video. Made the rest of the experience a lot more fun.

As a sidebar, I can't hear the name iPhone 4 without thinking of the idiot customer.

I'm on the east coast, with a car and a bike, and a week to spare starting on Tuesday next. Looking for a place with (here's the kicker) with 1-week rentals available, relatively flat (for biking), and good swimming. Doesn't have to be salt water.

I want to bike on country roads, do some writing and reading, maybe have a couple of friends join me from elsewhere on the east coast.

There Will Be Breakage

For some reason I decided to re-watch There Will Be Blood, starring Daniel Day-Lewis. I didn't care for it the first time, but the second time, wow I really did. Especially the music. And he's a great actor, and the movie is more like a painting than a plot. A few scenes, a few characters, they interact, there's a little drama here and there. But mostly it's the music and the scenery and the sets and the acting. Especially the music.

Another title that would have worked: No Country For Old Software.

What am I talking about? Twitter's Oauthcalypse, of course!

I promised that I would not convert my Twitter software. I plan to keep that promise. But now I can see how much I'll be giving up. I have lots of little systems that depend on Twitter, here and there. You hardly notice them, but they will be noticed, when they're gone.

I suppose I could convert them. But then they have promised to rip up the pavement again when the next version of OAuth is finalized. They say that one will be easier to support, but sheez, I already did the grueling work to support the first one.

Whatever. The Twitter platform is going the wrong way. Deprecation is bad software culture. I've never liked it.

Once I broke my users in a transition that involved changing the names of API routines that had clearly been labeled as toys. They screamed, and they were right. You pick a name, you stick with it. You don't decide one day that Amy would be a better name for your daughter Jody. "Henceforth, I, your father, proclaim the name Jody is deprecated. You and your friends shall now refer to the person formerly known as Jody as Amy." Your daughter and her friends would tell you to fuck off. And they would be right.

Sometimes there is a right and a wrong, and Twitter is just plain wrong about this Oauthcalypse nonsense. If I were making any money from my efforts with Twitter it might make sense to suck it up and do what they ask. But now seems as good a time as any to just say no and let it go. I'll try to think of a movie title that goes with that sentiment.

Throwing out software that works

Interesting piece with a simple point by Marco.

He shows how the smartphone market was transformed in 2007 by the introduction of the iPhone. He's right that the lack of a removable battery and slots did not hinder the adoption of the iPhone. But I don't recall people saying it would be a failure because of its lack of expandability in hardware. However I do remember criticism for its lack of expandability in software.

Marco then extrapolates that the same is about to happen in netbooks. I agree with his conclusion, but I don't agree with the reason. And as with the iPhone, we're losing something important if the transition we agree is happening actually happens.

The key difference: There was no bottleneck for software in the pre-iPad netbooks. It matters. I just read an article about the Republican party running sexist TV ads, on my iPad, but had to get up and look at the same page on my Mac so I could watch the video.

I uploaded a video to Flickr from my iPhone 4, looks fine on my desktop but the video is postage-stamp size on the iPad.

I wanted to set the location on the map but Yahoo's mapping software doesn't work on the iPad.

We're entering an era of deliberate degradation of the user experience and throwing overboard of software that works, for corporate reasons.

That said, I'd prefer to read a book like Computer Lib/Dream Machines on an iPad than on paper. But I don't want a corporation deciding what software I can and can't use, or what I can and can't read.

What I want is the convenient form factor without the corporate filter.

It's way too simplistic to believe that we'll get that, but we had it. That's what I don't like -- deliberate devolution.

PS: Looping back to an earlier piece that mentioned in passing that Microsoft was once able to think and act big, look at how they blew the opening created by netbooks.

PPS: Why the iPad form is winning -- the netbook makers are abdicating. It's likely because Microsoft and Intel have exerted too much control, behind the scenes, and kept the market from growing.