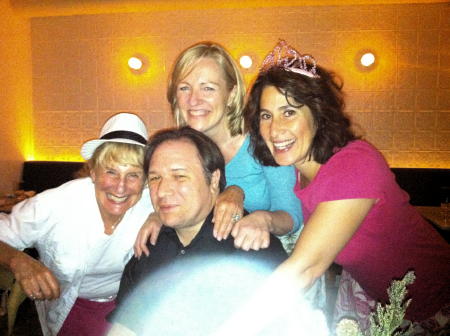 Embracing failure is a good way to fail

I've been hearing all this happy talk about how great it is for Google that Wave failed. The theory being that if you fail that means you took a chance, and taking chances is good therefore failing is good.

This is really convoluted and it's really wrong.

The only way to succeed in my opinion is if you cannot visualize failure.

I've been there. In 1986 my company was in very deep shit. One night I was leaving the office and I knew the next morning I was going to lay off a quarter of the company and cut the salaries of everyone else in half. Even after doing that I still didn't think we could make it. My board had told me to shut the company down and I told them to STFU.

As I locked the front door I stopped and thought, how would it work if we did fail? Would I lock the front door one last time and then walk away? I literally couldn't visualize it. As I drove home I resolved that I would never do that. Somehow we'd get through this crisis and we'd make it work.

Later, when it did work, I realized that moment, while locking the front door that night, was when the company turned around. When we went from being in crisis mode to being a winner, for one very simple reason. I tried to visualize failure, and couldn't do it.

It didn't really sink in until my second company washed up on shore and couldn't get back to sea. We didn't have that feeling that failure wasn't an option because the way it was set up was the way big companies set up projects. None of us could lose our jobs. We had enough money to try again and again. I think this is why real startups have a chance to do something truly new and established companies can't. Because not only is failure a real option, it also is pretty inevitable.

In any case, it's pure nonsense that failure is a good thing. It isn't. It happens a lot, that's for sure. But it's good if you risk and win. If you risk and lose, that's the definition of "bad."

Is Apple's freeze-out of Flash working?

Google Finance says the wonderful version of their graphs are only available if you have Flash installed.

How do I know? Well I'm an iPad user.

I was interested to see that San Francisco is shutting down the Transbay Terminal today, getting ready to demolish it and replace it with a wonderful new commuter center, right on Interstate 80. I would have loved to have seen the interactive rendering of the new terminal but I couldn't. I was using my iPad and they did it with Flash.

Maybe they didn't get the memo.

Or maybe they don't care.

I think pretty soon Apple has to scare off all the Flash content or the users are going to be asking why there all these holes in their iPad browsing experience.

I have my own industry-insider reasons for despising what Apple is doing with Flash, even though I'm not a big fan of Flash. I despise it because they're using the users as pawns in a business chess match. Using us because they could have written a Flash emulator. That would have been the user-loving thing to do. I don't like to be seen as a tool to win a victory that I don't understand and I don't care to understand. That's me wearing my user hat. I'd just like to see the spiffy graphs and learn about the plans for the new Transbay Terminal.

I always get requests from people who remember a piece I wrote about this or that, but can't find the piece in Google.

I know how they feel, because this happens to me all the time.

For example, I wrote a piece once that explains how engineers inside big companies feel about "outside" developers. Can't find it.

Someone asked for a pointer to a piece I wrote about eliminating clutter. I think I wrote it just in the last few months. Can't find it either.

The inverse also happens. Someone posts a link to a piece on this site, but I don't have any memory of writing it. After reading it, it all comes back -- yeah -- I put a lot of time into thinking about that and writing about it.

Basically this stuff needs to be organized and categorized and cross-related.

I have great tools for that, and where they're lacking I don't mind writing more tools. That's what I love to do. But sifting through all the back issues of this site -- well I know I have to do it, but somehow I never have the time.

If you're the kind of person who loves to organize written work, and have been reading this site for a while, let me know, and let's see if we can get something going. Obviously whatever we learn here can be applied to other bases of writing.

S3 is missing one feature for web hosting

I'd love to see them do it, then I could move my archived static sites up to S3 and forget about them.

But they're missing a key feature for web hosting -- index files.

Suppose I put a website on S3 and map a domain to it:

Try going there, you'll get an XML error return.

But... it does have an index file.

All Amazon has to do is make the first URL work, which is how web servers work by default, and boom they're in the web hosting business.

Without it, all we can use it for is to store images, MP3s, JavaScript snippets, archives.