What a mess, but it has a happy ending.

I now have an Apache sub-folder of my Dropbox folder that contains sub-folders whose names are domains.

When I create a new folder and point that domain at the machine running Apache, it automatically is configured to host that domain out of that folder. And I can copy files into that folder from any of my machines on my Dropbox network.

I was finally able to create a NTFS junction using an Explorer add-in that Samir Talwar gave me a pointer to. Bravo Samir!

As always the Scripting News braintrust not only has a myriad of answers, but has the right one, and we get there quickly in good spirits.

You guys are the best!!!

Nice things about the web

Oh how the Bay Area culture loves to make technology a life-and-death struggle. Things that were never alive in the first place, like the web and RSS are said to be "dead." I think it's hubris and bad karma to be in the business of pronouncing things dead. That's the province of a higher being . Us mortals, well we do die. I'd hate to have my last words be that something or someone else is dead.

Anyway, to paraphrase the famous fictitious Met, Chico Escuela, "The web been berry berry good to me." So rather than say bad things about Wired and magazines, I thought I'd start a list of nice things about the web. If you'd like to make a contribution, leave a comment, or link to a blog post of your own that says something nice about the web.

1. The web is where I read about the web being dead.

2. I can write what I want on the web and Steve Jobs doesn't have a say in it.

3. NakedJen is called NakedJen on the web, where on Facebook she's called "Jennifer Neal," which I find both confusing and sad.

5. The web allows for graphics. That's how I was able to paste in the beautiful picture of a cupcake in the right margin.

6. The web also makes reciprocity easy, that's why I linked to places you can buy cupcakes or books about cupcakes. These are all things that can make you happy.

8. It's where my brain trust meets to help me solve technical problems.

What to say but I got the beat.

Here's the route in Google Maps.

A picture of the turnaround point.

Sailboats on the Hudson. 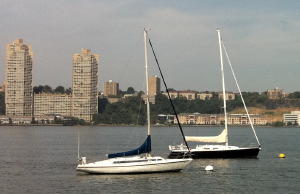 Hot and humid, but good biking weather. Not too many people on the trail.

First time I made it as far as 125th. Next stop Yankee Stadium.

Update: I got it working!

I'm trying to do something simple and interesting, but hit a rough spot, and thought I'd ask the brain trust here if you all had any ideas.

The idea: Serve static content out of a Dropbox sub-folder using Apache.

The design: I have a new folder at the top level of my dropbox called Apache. Each sub-folder has the name of a domain, say xyz.com, abc.org and 27 others. I have a script watching that folder for the appearance of new folders. When it finds one, it rebuilds my Apache httpd-vhosts.conf file including a mapping of the new domain to the folder in the dropbox hierarchy. Apache then restarts, and voila, I've used Dropbox to configure Apache. Even better, I can copy a new file to any of these folder, or modify an existing file, from any machine that shares this folder and have it instantaneouslly update. It's like Drobox's Public folder, but more more flexible and powerful.

The glitch: While you can control the location of your dropbox, you cannot change its name. It must be My Dropbox. The problem is the space. It's illegal syntax as far as I can tell, in an Apache config file, to have a space in a folder name. Seems there must be some way to escape it, but I don't know it. Or if you know a way to tell Dropbox to use a different named folder, say MyDropbox.

It's probably obvious, or this may not be the problem. The usual disclaimers apply and any help will be appreciated.

Followup: Well the first problem was solved, by using double-quotes. Now Apache can parse the name of the folder. But a subsequent problem was revealed. Apache won't serve files that are outside its folder hierarchy. This problem could of course be solved by moving the My Dropbox folder into its hiearchy but this is a bad idea. Most of the stuff in the folder is not intended to be served.

The obvious solution is to add a Windows shortcut to the Apache hierarchy pointing to the sub-folder of the Dropbox hierarchy that's intended to be served. Nice idea, and I tried it, but Apache doesn't seem to traverse the shortcut. So the next question is this: Apache on Windows and shortcuts -- any hope of them getting along?

Update: Shortcuts don't work, but how about NTFS junctions. Well, try to get one made. Would it be too much trouble to just make a right-click way to do it? Well, yes it would. You have to go to the command line, and it doesn't like filenames with spaces in them either. So I tried to run the Dropbox utility to change the freaking name of the folder, well that didn't work. As a result I'm now re-downloading the whole Dropbox archive into a folder with a space in its name. Well fuck me.

My software for this fun little project (which is what it was supposed to be) took 15 minutes. Getting Apache, Windows and Dropbox to deal with one freaking space in a folder name, that's taking hours. I should have given up on this long ago. Whats my next step? A bike ride.